100th Anniversary of the Sykes-Picot: Agreement which changed the Middle East 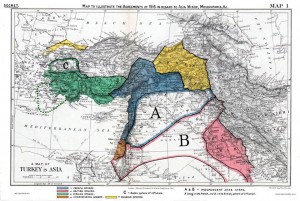 The Students‘ Solidarity Movement is proud to invite you to a discussion organised on the occasion of the 100th Anniversary of the so-called Sykes-Picot Agreement.

The Sykes-Picot Agreement was a secret accord between the Great Britain and France from 16th May 1916, by which most of the Arab lands under the rule of the Ottoman Empire were to be divided into British and French spheres of influence with the conclusion of World War I. It has allegedly had some severe repercusssions on the socio-political climate in the Middle East for the rest of the 20th century. Today, the Sykes-Picot is often mentioned by those who blame the West for destroying stability in the Middle East.

Are these accusations well-founded? What were the circumstances of this Agreement? Did it reflect the already existing non-political borders? What results can be identified? How do common people in Syria, Iraq or Lebanon see this Agreement today?

To answer these questions, we invited some very distinguished guests to join the panel debate:

We are currently waiting for other guests to accept our invitations, so the panel may be wider in the end.

The entry is free, no registration needed.
Discussion will be held in English.