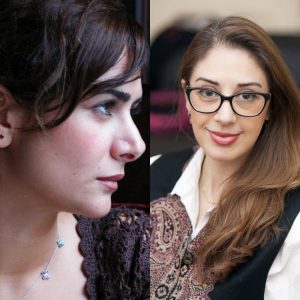 Two Iranian authors, Bita Malakuti and Razziyeh Ansari, will discuss their literary work and read short excerpts from their prose and poetry in Persian, Czech and English.

Bita Malakuti was born in Tehran. She started taking writing seriously by the age of 20 and poems and short stories were getting published in different magazines before she 25. So far she has published seven books, including three collections of short stories, two poetry, one novella and one reference book on the professional life of the renowned Iranian actress Soosan Taslimi. She left Iran for the United States in 2006 and now she is living in Prague, Czech Republic. Some of her poems have been translated and published in other languages such as English, French, Turkish, Kurdish, Swedish, Czech, Arabic, Nepali and Spanish.

Razieh Ansari studied linguistics and German studies in Iran. She cooperated with many Iranian periodics, eg. Negah-e now, Bahar, Sharq, Hamshahri.. At her literary work, she focuses at interaction between tradition an modernity and her prosaic works have won her national as well as international recognition. Her first novel, Like A Scent in the Breeze, was awarded the Iranian Literary Prize in 2012. Her subsequent novels, Tehran Trio and A Woman with a Pearl Brooch, were both received with critical acclaim. Raziyeh Ansari lives currently at Prague.