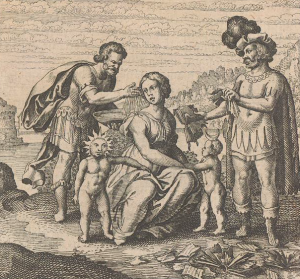 Tara E. Nummedal: Alchemy in Code: Digitizing Atalanta fugiens
This talk will explore the German physician Michael Maier’s 1618 musical alchemical emblem book, Atalanta fugiens (Atalanta fleeing). In the seventeenth century, Maier deployed all of the technologies of the early modern book to provoke a particular form of reading, inviting readers (and viewers and listeners) to activate all of their senses and reflect on the proper relationship between the intellect and the senses in exploring nature’s secrets. Today, four centuries after its publication, Maier’s book offers the opportunity to reflect on new digital technologies as well, especially their potential to allow modern readers to read and experience early modern books in innovative and unconventional ways.

Jonathan P. Conant: The Widow and the Fig: Rethinking the Lives of Rural Women in Fifth-Century North Africa
In the Middle Ages, widows and their children were regarded as particularly vulnerable populations. Drawing on a remarkable collection of deeds of sale written in the North African countryside at the end of the fifth century, this paper will re-evaluate the role of widows in one small peasant community in the Vandal kingdom, paying particular attention to the question of their economic vulnerability.