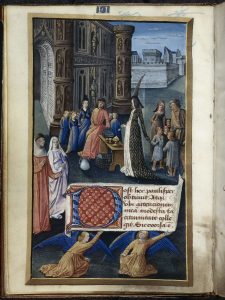 Capable of granting riches and honours and abruptly withdrawing her favours, the capricious figure of Fortune, inspired by the pagan goddess, was one of the most alarming constructs inherited by medieval thinkers from their Roman predecessors. From Boethius onwards, writers and artists sought to describe the paradoxical nature of Fortune, personified as a female figure whose only stable characteristic was her mutability. Among the attributes assigned to Fortune were a crown signalling her sovereignty over mortal affairs, a blindfold underscoring her indifference and disregard for merit, multiple hands ready to reward or ruin, and, above all, her perpetually turning wheel. As outlined in this talk, in addition to these overt emblems, colour played a major part in medieval conceptions of Fortune. To signal her variability, artists sometimes depicted her with two faces (one light and one dark), painted one side of her face black and the other white, and clothed her in bi- or multi-coloured gowns. In these depictions of Fortune, meaning is dependent on combinations of colours, rather than attributes alone. Focusing on fifteenth-century France, this paper examines the strategic deployment of colours by leading illuminators who transformed and reinvigorated the venerable symbol of Fortune, including the Luçon Master (fl. c.1400–1415), Jean Colombe (c.1430–1493) and Jean Bourdichon (1457–1521).