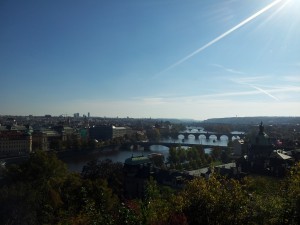 The Czech Republic is situated in Central Europe. It has been historically divided into three regions: Bohemia, Moravia, and Silesia. The total area is 78,886 square metres and the country’s population amounts to 10.65 million. The capital city is Prague (Praha), with 1.2 million residents, and there are 5 other cities with population exceeding 100,000 – Brno, Plzeň, Olomouc, Ostrava and Liberec. The Czech Republic has borders with Germany, Poland, Austria, and Slovakia. The country is encircled by mountain ranges – Krkonoše in the north-east, Krušné Hory in the north-west, Šumava in the south-west, Hrubý Jeseník in Moravia, and the Moravian-Silesian Beskydy. The highest point is the mountain Sněžka (1,603 meters above sea level). Many important rivers (the Elbe, Oder, Morava, Vltava (Moldau), etc.) flow through the country. In the past, a network of ancient trade routes running from east, west, north and south intersected in the country and therefore over the centuries, many of the nations of Europe have been meeting here and influencing each other’s destinies.

The Czech Republic is virtually a showcase of architectural styles, as reflected in many historic towns, castles and manor houses. Prague is often referred to as one of the most beautiful European capitals. It offers a large variety of ways to enjoy free time – sightseeing, visiting cultural events, galleries and museums, or simply hanging around with the locals. Due to its situation in the very heart of Europe, it is also a handy point of departure for trips to Vienna, Dresden, Budapest, and Warsaw.

Study abroad brings a large number of opportunities to learn about the life in a foreign country, to make new friends and, simply, to collect memories of a truly intensive experience for the rest of your life. The Faculty organises various Erasmus club activities for foreign students, including sightseeing tours of Prague and the Czech Republic, Czech evenings and events promoting knowledge about Czech culture and traditions. Another society designated for foreign students offering possibilities to learn more about the Czech Republic is the Charles University International Club besides organising various trips it also provides tutor assistance to students and a tandem teaching program for mutual language exchange among students. 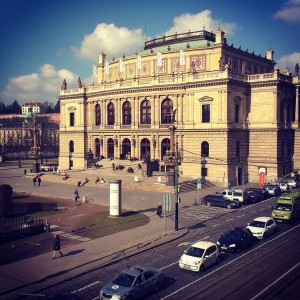 Admirers of all styles of architecture, from Romanesque round churches to Cubist villas, will surely enjoy Prague’s architectonic jewels. The must-see monuments include the Prague Castle with the St Vitus Cathedral, Charles Bridge, the Old Town Square with the Town Hall Clock, and also the Lesser Quarter with its wealth of Baroque churches. A unique way of seeing the town from a completely different perspective is to climb one of the many towers open to the public – the spire of St Vitus Cathedral, the Petřín Tower (actually an Eiffel Tower miniature), one of the two Charles Bridge towers, or the tower of the Old Town Hall. For more information about Prague architecture, see Must-See Buildings in Prague.

One of the most popular sights in Prague is the Jewish Museum and the adjacent Jewish town and cemetery – the remaining parts of the former Jewish ghetto that was largely erased by new urban developments at the beginning of the 20th century. The largest museum is the National Museum, located in the upper part of Wenceslas Square, which contains permanent expositions of prehistoric finds from the Czech Lands as well as mineralogical, paleonthological and other collections. Another museum worth seeing is the recently re-opened National Technical Museum, which holds a large number and broad variety of exhibits reflecting the history of science and technology. The most important gallery is the National Gallery whose several separate expositions offering a representative collection of Czech and European art. Those who are interested in applied arts should pay a visit to the Museum of Decorative Art. Nature enthusiasts will definitely appreciate the Prague district of Troja where the Prague Zoo and the Botanical Gardens are located.

CUFA buildings on the map