The outstanding quality of research performed by students and academic staff at the Faculty of Arts is reflected in the number of diverse prizes and awards they frequently receive, both in the Czech Republic and abroad. Honorary awards are presented to academics for lifelong achievements, for example the Emeritus Professor title and the commemorative medal of the Faculty of Arts. The most significant honorary title awarded to outstanding representatives of Czech and foreign public and scientific life is Doctor Honoris Causa.

There are several awards presented by Charles University, the most important of them being Bolzano Award, open to BA, MA, and PhD students who can be nominated for their exceptional thesis defended or published during the ending academic year. Individual faculties take part in the Competition of High-Quality Monographs. Every year, the University present two rector’s awards (Rector’s Special Award and the Award for the Best Alumni), Jaroslav Jirsa Award for the best textbook, Bedřich Hrozný Award for creative activities, and Miroslav Petrusek Award for representing Charles University.

In 2010, Professor Anne Hudson of the University of Oxford was awarded an honorary degree in history (the audio record of the ceremony). Professor Anne Hudson was born in the U.K. in 1938. She studied English and Literature at St. Hugh’s in Oxford where she received a Ph.D. degree in this field in 1964. From 1961, Anne Hudson was first lecturer and then professor of Medieval English at Lady Margaret Hall at the University of Oxford. She is still connected to this institution as Emeritus Professor (since 2003). In 1988 she was elected Fellow of the British Academy. The close relation of Professor Anne Hudson to Charles University is based on her contribution to the exploration of the historical relations between Oxford and Prague universities in the second half of the 14th and beginning of the 15th century. With her inventive approach she researched the inspirational role of the teachings of John Wycliffe and his Lollard followers in England in the formation of Jan Hus, his teachers, friends and disciples at Prague University. She presented new documentation of the direct contacts between the two institutions of higher learning at the time and the manner in which these institutions influenced the shaping of the early Reformation in England and Bohemia. Anne Hudson found a number of her important sources in libraries and archives during her study visits in our country and used the opportunity to become acquainted with Czech scholars with whom she engaged in active cooperation. The contribution of Professor Anne Hudson to knowledge about the beginnings of European and Czech Reformation, as well as her extensive research and organisational activities, make her one of the leading personalities of contemporary European historical science. 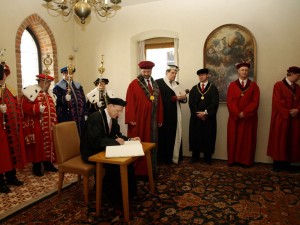 In 2010, the outstanding European German philologist and literary theoretician, professor at the University of Cologne, Walter Pape, received an honorary doctorate in Philosophy. Prof. Dr. Walter Pape was born in Magdeburg in 1945. He studied German and English philology and political science at the University of Heidelberg. He received his doctoral degree in 1972 and associate professorship eight years later. His academic career is linked especially to the University of Cologne where he became professor in 1988. Professor Walter Pape is both a leading German philologist and literary theoretician, and much respected authority at the Faculty of Arts in Cologne, which he headed in 1997 to 2003. The international authority of Walter Pape has been confirmed by, for example, his stay as visiting professor at the University of California, San Diego – Santa Barbara, 1983 and 1985, and by his membership in a number of important scholarly societies (Internationale Arnim-Gesellschaft, Internationale Nestroy-Gessellschaft in Vienna). Professor Walter Pape has been engaged in long-term cooperation between the University of Cologne and Charles University in Prague (in 2000 he became the academic senator in charge of developing mutual contacts). The long-term and continuous cooperation between the German studies departments of both universities has yielded valuable incentives and output for both students and their teachers and has enriched substantially the Czech and German academic communities. Professor Walter Pape is a leading European literary theoretician who has contributed tirelessly to the deepening of Czech-German relations in the areas of culture, research, and education.

In 2009, an honorary doctorate in philosophy has been awarded to the Polish historian, essayist and political writer Adam Michnik on the occasion of the anniversary of 17th November, International Students Day / Struggle for Freedom and Democracy Day.

In 2009, the title Doctor Honoris Causa in history was conferred on Professor Marie-Elizabeth Ducreux of the Centre National de la Recherche scientifique, Centre de Recherches Historiques (EHESS), for “the promotion and deepening of Czech-French relations in the area of culture, science and education.”