Uzbekistan – a country without hope? 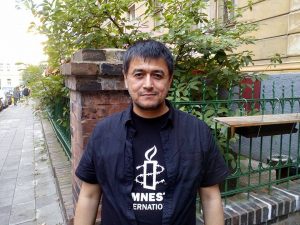 A debate with an Uzbek political scientist and dissenter Abdusami Rakhmonov during Festival of Democracy in Forum 2000.

Presented by Petra Procházková.
The event shall be interpreted from Russian into English.

Uzbekistan of today can no longer be described as tourist’s haven for adventurous escapes into ancient Arab cities, the historical sites along the Silk Road and palaces of mighty rulers. During the last years of Islam Karimov’s rule the country has become a hard-line Central Asian dictatorship allowing no dissent. The most basic human rights have been suppressed, tens of thousands of innocent people have been dragged through prisons and cruel medieval torturing methods remind of the times of the infamous ruler Tamerlane. Under Karimov, Uzbekistan has once more become a dangerous place in the world. On 2nd September 2016, however, the era of this tyrant unexpectedly came to an end…

What sort of a regime did Islam Karimov create during his twenty-five-year-long reign? Is it even possible to call it totalitarian? What will become of it now that Karimov is dead? What is the life like for ordinary people? Is this country of 30 million worth our attention? And finally, is there still any hope left for Uzbeks?

Abdusami Rakhmonov is an Uzbek political scientist who has been brutally interrogated several times for his civic activities. After he had escaped to Russia, not only was he denied political asylum, but he was sent to prison. Before his scheduled deportation back to Uzbekistan and with a great deal of luck he managed to escape into the Czech Republic where he has received international protection. His disabled brother, however, is serving his sixth year in an Uzbek prison.

Petra Procházková is a Czech journalist and war correspondent in Chechnya, Afghanistan and East Ukraine. In Chechnya she founded a humanitarian organization to help war orphans, to which she is still committed here in the Czech Republic. She works for the dailies Lidové noviny and Deník Sme.