Lecture by dr. Florian Dolberg: „all (of) this is about Variation in Discourse-Deixis“

Calendar > Lecture > Lecture by dr. Florian Dolberg: „all (of) this is about Variation in Discourse-Deixis“ 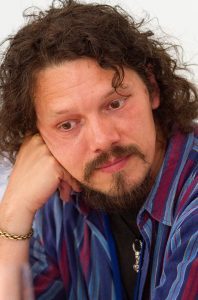 Contemporary variation between the pronominal constructions all this and all of this warrants some closer look at the diachronic development of the two. Serving as “discourse deictic demonstratives” (Diessel 1999:100-105) in “’strict’ anadeictic” (Cornish 2011:757-758) reference to propositions within the preceding discourse, the two appear functionally equivalent, yet display a different head-modifier order: all this consists of a demonstrative pronoun or a demonstrative determiner in a fused head construction as NP-head, predetermined by the universal quantifier, while all of this is a partitive construction comprising a universal pronoun serving as NP-head, postmodified by a prepositional phrase containing a pronominal NP (cf. Huddleston & Pullum 2002:374-378).

A first aim is to establish for how long this variation has been going on and how it developed over time, not least to find out whether one variant derives from the other. Second, do/did the two occupy different functional/stylistic niches and did these change over time? Finally, do the frequency distributions in present and past use of all this and all of this relate to other instances of variation and change and/or conform to large-scale trends such as developments towards or away from pre- or postmodification?

One such instance is the well-known dynamic variation between the Saxon genitive and the of-possessive throughout lME and eModE (cf. e.g. Rosenbach 2002:177-264). It is potentially relevant here as it too involves a premodified and a postmodified construction, likewise with the former being shorter and the latter containing a PP headed by of. These could hence serve as ‘supporting constructions’ (cf. De Smet & Fischer 2017) for all (of) this.

Quantitative corpus analyses ascertain which of the factors known to influence variation apply in this case and in which relative strength. Comparisons within and across several diachronic eModE and lModE corpora (e.g. EEBO, COHA, Hansard, TIME) elucidate how varieties, registers and periods differ in the factors underlying the choice between all this and all of this.

EEBO data indicates that the partitive of-construction occurs several decades later and only sporadically – merely two dozen instances throughout 1470-1690 compared to several thousand hits for all this. Current British (BYU-BNC) and American (COCA) English both prefer the of-less version, with the preference being much stronger in BE (6.3:1) than in AE (1.4:1). This suggests that the partitive construction gained some popularity only in lModE, and rather more in America than in Britain.