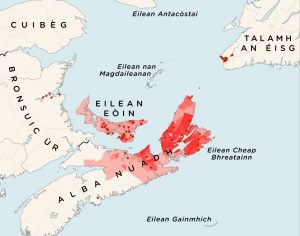 The Department of Anglophone Literatures and Cultures cordially invites you to the guest lecture “Gaelic in Canada” by Professor Rob Dunbar (University of Edinburgh).

Gaelic has been spoken in Nova Scotia (Cape Breton Island) and on the north-eastern mainland of the province by settlers from the Highlands and Islands of Scotland and their descendants since 1770s. The lecture will discuss the history of Gaelic in Canada, its present state, and also touch upon Canadian Gaelic literature and culture.

Prior to assuming the Chair of Celtic at Edinburgh in June 2013, Rob Dunbar was Senior Research Professor at the University of the Highlands and Islands, and Research Director of the inter-university Soillse Research Project. Previously, he had been a lecturer then senior lecturer in Law at the University of Glasgow (1995-2004) and reader then professor in Celtic and Law at the University of Aberdeen (2004-2010). A native of Canada, he has been involved in Gaelic language development for almost twenty years, and has worked with international organisations such as the Council of Europe, and the OSCE, national and sub-national governments, including the National Assembly for Wales, and governmental and non-governmental organisations, on issues broadly relating to the maintenance and revitalisation of minority languages and the protection of their speakers.