Ian Brodie: Canadian Folklore and Folkloristics: The Shaping of a Discipline

Calendar > Lecture > Ian Brodie: Canadian Folklore and Folkloristics: The Shaping of a Discipline 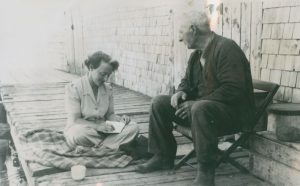 The lecture will cover the contextual differences – namely a history based in colonial expansion and colony establishment – that make folklore scholarship in North America and specifically Canada different from European models. It would also address the different nationalistic impulse, one that is as more about establishing a historic connection to land than it is about re-establishing or re-affirming that connection, and how it has been shaped by capitalism and tourism as much as it has by political ideologies.

(The photograph depicts important Canadian folklore collector Helen Creighton. Courtesy of her papers at the Nova Scotia Archives Album 14 no. 155 / negative no. N-197).