Saksham Sharda: „The interdisciplinary, intercultural and practical approach of TEEME won me over“

FF > News > Saksham Sharda: „The interdisciplinary, intercultural and practical approach of TEEME won me over“ 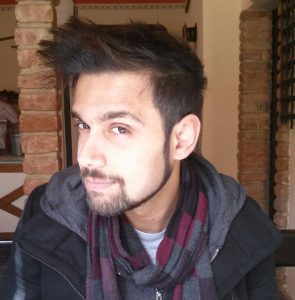 Saksham Sharda is a PhD candidate in the Erasmus Mundus Joint Doctorate TEEME. He currently works on his PhD at the Department of Anglophone Literature and Cultures, Faculty of Arts, where he also teaches the course Fashioning Shakespeare for Popular Cinema.

How did you get involved in TEEME?

I had applied for various PhD programmes around the world. In the end there was a choice between Australia and TEEME. And while Australia was seriously tempting—the interdisciplinary, intercultural and practical approach of TEEME won me over. The very fact that four countries: Czech Republic, Portugal, United Kingdom, and Germany were participating in this programme – with a whole host of their literary, theatrical, and cultural institutions tied up into it in one way or the other – effectively sealed the matter.

Your PhD topic is Shakespeare’s Bollywood and Bollywood’s Shakespeare: The Mechanics of Self-Fashioning in the Post-Colonial Space. Why did you choose it?

My PhD research has now evolved to become more or less about the accessibility of Shakespeare in the contemporary world. I started with Bollywood, of course, since Indian Shakespeare is very, very accessible for the everyman so to speak. Eventually I realized though that I couldn’t talk about Indian Shakespeare outside of India—and particularly in the West—without highlighting the sheer inaccessibility of Shakespeare in the West. British Shakespeare, for instance, is quite inaccessible even for native British people—its well-known commercial failure in cinema just being one of the cases in point. I feel, quite like the outgoing artistic director of Shakespeare’s Globe, that the British have valorised the ‘original’ Shakespeare to such an extent that even staging a translated modern-English version of his plays subtly amounts to ‘low culture.’ This is something that needs to be addressed and thus my thesis focuses on ‘The Shakespeare Salesmen’ of today’s age and of the past who have tried to tackle this issue. The title comes from the Merchant-Ivory film Shakespeare Wallah (literally: The Shakespeare Salesman) which records the declining popularity of Shakespeare in post-Independence India once the Empire’s material forces that fostered its production and celebration disappear.

How does your topic fit into the current research trends in the field?

I think—quite frankly—that it does not fit into current research trends in Shakespeare studies at all. Except for David Crystal, I mean, there’s hardly anyone out there talking about the inaccessibility of Early Modern English for modern audiences. However it is a very pressing issue outside of academia—in the film industry (where Shakespeare is considered “box-office poison” as The Guardian puts it) and in theatre.

Take the London theatre scene for instance: Shakespeare’s Globe—where I was doing my work placement—has more or less become the epicentre of this issue. In mid 2016 they brought in a new artistic director (Emma Rice) whose work had a reputation of being very pop-culture-ish and accessible. She vowed to rescue Shakespeare from the throes of a clique academic audience and bring him back to the everyman by translating, editing and shortening his plays. “Emma Rice is not as much a breath of fresh air on the London theatre scene”, The Telegraph aptly summarized, “as a one woman Tornado.” Eventually though the power of the discourse of Shakespeare’s universality was so thorough that she couldn’t make all the changes she wanted to because of resistance from certain departments. And the changes that she did manage to make eventually gave the Globe cold feet and they decided to fire her. This obviously caused an uproar on Twitter because even in the short time that she was there she managed to make Shakespeare so much more accessible—brought it to so many people who would otherwise have nothing to do with it. So yeah, there was a massive Twitter backlash against the Globe and I think at this particular moment the ivory-tower status of Shakespeare—his inaccessibility for the common man—was laid quite bare.

Do you have some other research interests?

I was seriously considering doing a PhD on Urban Dictionary before this. So there’s that I think. Otherwise let’s just say Self-Fashioning (and everything related to Stephen Greenblatt) and of course (as might be evident from the answers to the questions above) the effect of social media (Twitter etc.) on what one might loosely call ‘high’ culture.

During the TEEME programme, students move through several universities – what are your impressions from the Faculty of Arts and from Prague?

Prague was my first choice as a pathway institution. I have always been fascinated by the portrayal of Prague in literature and it remains to this day my favourite place on earth. Teaching at the Faculty of Arts is quite enriching. Every class that I have taught is so diverse: with students from different parts of Europe, Americas, and Asia. Having discussions with them in class has enabled me to look at my own research from so many different perspectives.

Would you have any recommendations for PhD students and for those who would like to apply for international PhD programmes?

Well, hopefully my supervisors aren’t reading this bit because I think that the PhD is essentially a cakewalk. Although that might be because I enjoy my topic so much that it hardly ever comes across as work (I have to literally stop myself from writing the thesis at times). So yeah, what I would recommend is that prospective PhD students always pick a topic that they like for their PhDs and they always remember that the only reason they ought to be going into academia is because they love getting lost in research.