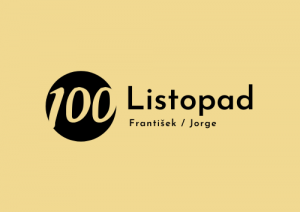 The extensive bilingual project takes place until December 2021. It aims to commemorate the diverse creations by František Listopad – a Czech writer, poet, literary and film critic, director, and pedagogue – who was born precisely 100 years ago.

The Portuguese Section under the Department of Romance Studies at CU FA and the Department of Portugal Studies at Faculty of Humanities Marie Curie-Sklodowska in Lublin supported by the Portugal Centre at the Camões Institute in Prague, have prepared a project, which main academic outcome will be an eponymous collection of literary-historical and literary-critical articles responding to the author’s literary and theatre production. The collection will be accompanied by a CD with experimental music from various European composers who were inspired by Listopad’s texts. The deadline for submission of the journal articles is on 30 September 2021.

Besides the publication of the collection, the second half of 2021 will revolve around other cultural activities: such as public readings and social gatherings. The aim is to collect contributions from different fields of art and to praise František Listopad, who built bridges between languages, communities, and cultures. You may rewatch the past poetic gatherings on our YouTube channel.

František Listopad, born Jiří Synek, known in Portugal as Jorge Listopad, was born on 26 November 1921 in Prague and passed away on 1 October 2017 in Lisbon. In different languages, he wrote poems, short stories, essays, he was a theatre and TV director and screenwriter, worked as a journalist, translator, and art critic. After the war, he was present at the establishment of the Czech daily Mladá fronta where he oversaw the culture column.

He studied aesthetics and literature at CU FA. After February 1948, he did not return from France, settled there for some time, and began with directing. In 1959, he moved to Portugal. In Lisbon, he co-founded Lisbon Theatre and Film School and became the director of the local National Theatre. Occasionally, he had been returning to the Czech Republic, usually to present some theatre production.
You may find more information on our social media and blog. If you have any questions, you may send us an email at 100.listopad@gmail.com.