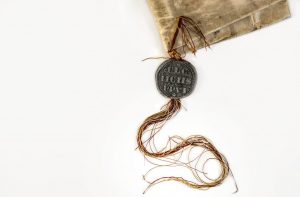 Officials at Charles University have presented to the public two historical documents dating back to the foundation of the university in Prague 670 years ago. The documents resurfaced only recently and were acquired from a private collection: the first is a papal letter and the second a notarial instrument. Both are of enormous historic significance and date back to 1347. They reveal how consent for the foundation of the university was granted.

The papal letter is from Pope Clement VI (dated 26 January 1347) and expresses his consent to the foundation, which was crucial; the second parchment is a notarial act, written at the behest of the Prague metropolitan chapter. Dated 30 June 1347, it is effectively a transcription of the papal letter: it was commissioned for everyday use or reference, a possible explanation for why it suffered far greater wear and tear.

Historian Petr Svobodný says both parchments are of enormous importance and need to be appreciated in proper context. “Both documents outline the history of the foundation of the university in Prague; they date back to the very beginning of the university. Both were issued between 1347 and 1348 and prepared the ground for the foundation. The first was sent by Pope Clement VI in 1347 and preceded a founding document, issued later by the King of Bohemia and Holy Roman Emperor Charles IV. Both charters were crucial to the establishment of the university, a process that was in itself fairly complex.”

The papal letter of 26 January 1347, unveiled on Friday, is written on Italian parchment and is in good condition. It is furnished with an attached leaden papal seal, which depicts St. Peter and St. Paul on the obverse side, while the reverse contains the name of Pope Clement VI, who was the tutor of the future king and emperor during his sojourn at the Parisian royal court. The letter states, that in response to Charles’s petition, that Pope Clement VI granted his consent for the foundation of a university in Prague.

Professor Petr Svobodný explains that the existence of the papal letter was known thanks to the existence of another original, long lost. “The first papal document, or charter, was known until recently through only one original document, which unfortunately disappeared after 1945. It is only now that the second version, or the second original, was discovered and presented today. It is interesting that Charles’s founding charter [of Charles University] was also issued in two originals, one of which was kept in the university archives and also disappeared in 1945, and the other which survived to this day at the archives of the Prague Castle.”

Both medieval documents unveiled on Friday, the papal letter and the notarial instrument, will no doubt be the subject of considerable study, with follow-up findings and publications in the future.