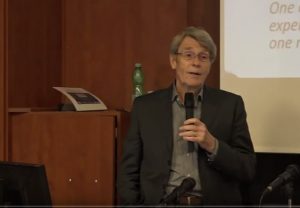 Professor Roger Griffin from the University of Oxford started the conference Fascism_Modernism_Populism on 23 May 2017 with a lecture „Post-Soviet Modernity and the Rise of Xenophobic Populism“.

Roger Griffin is widely acknowledged to be one of the world’s foremost experts on the socio-historical and ideological dynamics of fascism, as well as the relationship of various forms of political  or religious fanaticism, and in particular contemporary terrorism, to modernity. He began teaching at what was then Oxford Polytechnic over forty years ago, and has played an active part in its evolution into what is regularly voted the UK’s outstanding New University in the country, working alongside one of the more successfulteams of historians in England in terms of the quality of its research output ‚per head‘ according to the RAE/REF of 2001, 2008, 2014. As an extension and application of his academic research into the social dynamics of extremist ideology and fanatism under the impact of modernity he has made a number of contributions outside academia to a humanistic understanding of terrorist radicalization and the identification of the processes involved in deradicalization. His theory of ‚heroic doubling‘ is now the basis of a major research project based on multi-agency collaboration. Meanwhile his theories of fascism and of fascism’s relationship to religion, ulltranationalism, totalitarianism, aesthetics and modernism continue to be widely used in Eastern Europe and have attracted interest as far away as South Korea, China and Japan.