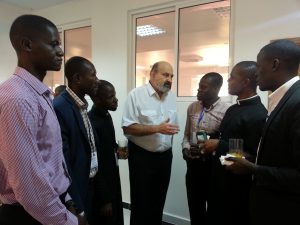 On 30 January – 5 February 2017, the first meeting of leading African and European theologians took place in Angola. On the invitation of the Archbishop of Luanda and President of the Angolan Catholic Bishops‘ Conference, Mons. Filomen Dias, the Czech theologian and recipient of the Templeton Prize, Professor Tomáš Halík, took part in the conference as one of the main speakers.

About 300 bishops, professors of theology, and seminarians from Africa, Europe (especially Portugal, Spain, and France), and Canada attended the conference. Representatives of non-catholic churches in Africa were also present. Several papers addressed the reform efforts of Pope Francis and the future direction of the Catholic Church, others focused on the specific theological contribution of the dynamically growing Christianity in Africa.

In his lecture entitled „The Art of Reading Signs of the Time. Theological Hermeneutics of Contemporary Culture“, Professor Halík suggested that the current social teaching of the Church could be replaced with a new discipline, „cairology“, which would develop the prophetic and critical role of the Church in contemporary world by employing methods of today’s philosophy, especially phenomenology and hermeneutics (the art of interpretation).

The conference participants also visited the Catholic University in Luanda and the Dominican centre for human rights defense in Angola.