Students Shall Work with Manuscripts in the St. Gallen Abbey Library

FF > News > Students Shall Work with Manuscripts in the St. Gallen Abbey Library 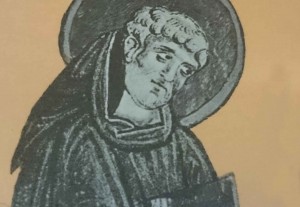 The Department of Greek and Latin Studies, Faculty of Arts, has successfully applied for a grant from the Partnership Fund in the Swiss-Czech Cooperation Programme. Thanks to this grant, a closer cooperation between Charles University and St. Gallen Abbey Library has been established in the areas of medieval literature and paleography.

The cooperation of both institutions dates back to 2014 when a group of students under the supervision of Dr Iva Adámková (Department of Greek and Latin Studies) visited the Abbey Library in St. Gallen and established contacts with Franziska Schnoor, M.A., who works in the library as a researcher. In 2015, Ms. Schnoor gave a lecture at the Department on the oldest copies of the Benedictine rule. The project allows to follow this cooperation, to develop it and expand it. The project consists of two main activities: intensive Czech-Swiss seminar under joint supervision (Franziska Schnoor, Iva Adámková), which took place in Prague in January 2016, and the subsequent research of manuscripts in St. Gallen. During the seminar in January, which was opened by the representative of Swiss Embassy in the Czech Republic, Ms. Vera Hoffmann, the students got acquainted with the characteristics of the St. Gallen monastery, its history and the scriptorium, and with the Latin authors who worked there. The students also read the texts which originated in the St. Gallen monastery in Latin and interpreted them. 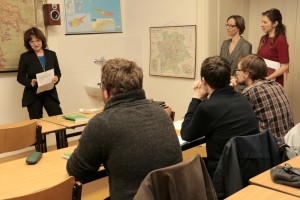 In May, the Prague seminar shall be followed by a training course in the Abbey Library of St. Gallen which is unique not only in Switzerland, but in the whole world (its funds contain material dating back to the 6th century AD) and has been included into the UNESCO list. The opportunity to get to know the library fund and to study original manuscripts in detail shall expand the academic expertise of the students. As Franziska Schnoor explained, „Students will have the chance to work with the original manuscripts in Latin which we discussed theoretically in the seminars, and continue their research about the monastery and its library in the place itself.“