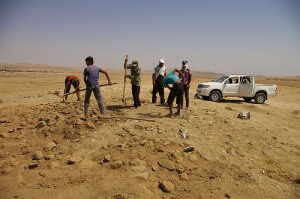 When a team of three researchers of the Institute of Classical Archaeology, CU FA set off for the Paschurt Valley, their initial plan was to inspect kurgans, funeral barrows typical of steppe cultures. A discovery they made in a nearby site meant a complete change of their plans. What they discovered was settlements dating back to the Iron and Bronze Ages, including a well-preserved irrigation system.

The Paschurt Valley is located in the south of Uzbekistan, a country which has become a traditional destination for Czech archaeologists: 2014 has been the thirteenth year in a row for the team of the CU FA´s Institute of Classical Archaeology.