NECS 2013 Conference to Focus on Relationship Between Politics and Media 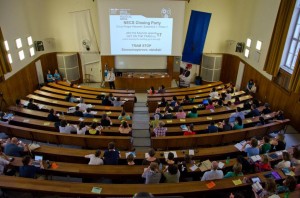 Commenting on the scale of the event, Petr Szczepanik, the programme manager said: “We are expecting a record number of around 470 active participants in the Conference this year.” The annual European Network for Cinema and Media Studies (NECS) Conference will take place at Charles University´s Faculty of Arts from Thursday, 20 June till Saturday, 22 June.

What led the organizers to choose the conference topic?

The topic “Media Politics – Political Media”, in other words, the mutual relationship between politics and the media, was chosen after long discussions, and I think it was a good strategic decision since we have managed to bring into play a wide spectrum of relations. The topic brings us closer to the current trends in the media, such as committed users, sharing, copyright, media ecology and new forms of censorship as well as more general social issues that affect our lives. At the same time, it makes us remind ourselves of our own roots and of the political dimensions of theoretical thinking about the media, of terms like realism, author, media effect and audience.

Film studies were established, to a large extent, as a political project by intellectuals in post-war Western Europe; current theory is equally based on political foundations, even if it is unaware of that. The media itself has always been the battleground of politics, in the form of, among other things, disputes over ownership and ideological control, over the relation of the state and culture, and in the form of corruption. Last but not least, internal political disputes are inherent in the profession of film-makers or, more generally, media professionals, which consequently reflects in the decision-making about creative and personal issues, a field so far almost unexplored.

What does the Conference give its participants?

The Conference, which was established eight years ago, has been growing in terms of the number of speakers and panels as well as the diversity of topics and formats. This year has brought several novelties, including workshops with practising professionals, mainly festival producers and organizers as well as a poster forum, an opportunity for doctoral students to present their projects through a visual summary, a poster of sorts, which is fairly normal in the exact sciences, but not in the humanities. We are expecting a record number of around 470 active participants in the Conference this year.

Who is the target audience?

While it is true that the majority of participants will be doctoral students and fresh Ph.D. graduates aged twenty-five to thirty-five from Western Europe, the conference is targeted at all those interested in the theory and history of the media, including practising professionals. The audience is diverse in nationality, with most participants coming from the UK, Germany, the Netherlands and the US, although the number of representatives of South America and Asia is on the increase.

The topic of this year´s conference has, I believe, a strong potential to appeal to a wider community of experts. Our keynote speakers will be of great help: Getrud Koch, a renowned German theoretician and expert on Kracauer, will give a speech on the aesthetics of film images, and Georgina Born, Professor of cultural anthropology at Oxford and an expert on the BBC, will talk about “Media Politics 2.0: from the BBC to African Media Capitalism”; the third special lecture will be delivered by Jonathan Beller, a U.S. critic of contemporary capitalization and industrialization of visual perception.

What makes the NECS platform unique?

The NECS was initiated by a group of German and Swiss colleagues and friends who were in their thirties back then. Their aspiration was to found an association of film and media studies as a European counterpart of the U.S. Society for Cinema and Media Studies, the world´s largest organization in this industry. That institution, despite declaring its international orientation, is, in effect, strongly U.S.-centric. What I like about the NECS is that it has retained an open and egalitarian nature it had at the beginning, remaining an organization of enthusiasts who love their field and, to a large extent, know each other. Its members can enter interest groups called workgroups revolving around topics such as festivals, avant-garde or theory of fashion; they receive a newsletter which details conferences and job opportunities; they have a publication opportunity in a newly-established, peer-reviewed journal, NECSUS; the most important role, however, is that of community spirit: direct personal contact across national and language borders. New members are welcome – they can start by registering at www.necs.org.

All lectures and discussions are held in English. Registration is now no longer possible; members of the CU FA academic community will be granted free entry to all lectures of the conference.

The conference started in Berlin eight years ago as an annual event of the NECS (European Network for Cinema and Media Studies), which aspires to promote theoretical and historical research in film, television and other audiovisual media. This is the eighth year of the conference, scheduled – like the previous years – to take place in one of Europe´s top cities. After Berlin, Vienna, Budapest, Lund, Istanbul, London and Lisbon, Prague is the venue this year, with the Czech Society for Film Studies (CEFS), a recently established organization and the NECS´s national partner, having played an important role in the selection procedure. The conference topics and formats include aesthetics, history, sociology, philosophy and media politics, specialized panels on the history of film reception, workshops with festival producers and organizers, and special forums featuring new projects and publications through visual summaries in the form of posters. All this would be impossible without the support of organizing and sponsor institutions: Faculty of Arts, CU, Faculty of Arts of Masaryk University in Brno, Philosophical Faculty of Palacký University in Olomouc, the FIND project under the ‚Education for Competitiveness‘ Operational Programme, National Film Archive, the City of Prague, and the Czech-German Future Fund.

On behalf of organizers of the NECS Conference, Mgr. Petr Szczepanik, Ph.D., programme manager of the Conference