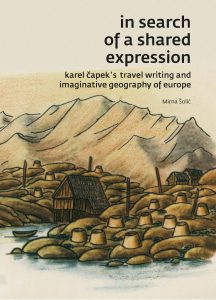 Aimed at international, non-Czech readers as well as Czech audience, the new monograph by Mirna Šolić In Search of a Shared Expression examines Karel Čapek’s travel writing from different theoretical perspectives, and contextualises it within Czech and European interwar modernist travel writing poetics, and explores the links with visual art of the period.

Karel Čapek (1890-1938) wrote at the time when the travel writing genre gained some of its most prominent artistic and narrative features, and the theme of travel permeated both literature and visual art. He contributed to its unique legacy founded on modernist, cross-generic and cross-artistic experiments not only in his travel writing, but also by incorporating the notion of travel into his other literary pursuits – from his translation of Apollinaire’s Zone (1919) to the rendition of newts in his internationally renowned novel War With the Newts (1936). Čapek experimented with aesthetic features of the genre and the theme of travel, and, in accordance with cosmopolitan tendencies of the period, sought to overcome the opposition between home and abroad by suggesting an imaginative geography of Europe based on aesthetic, rather than political identity. As he demonstrated in his own life, „becoming European through being Czech“ is to be achieved through the awareness of a shared artistic tradition and exploration of the limits of literary expression, its ability to convey new times and new realities. In the aftermath of the Great War, and during the time when his country was looking for a chance to promote its identity, the travel writing genre, as well as the articulation of this theme across literature and arts, offered a platform for exploration and experimentation with these ideas.

Mirna Šolić is a lecturer at School of Modern Languages & Cultures, University of Glasgow, and a member of the Centre for Russian, Central and East European Studies. She teaches and convenes courses on undergraduate and postgraduate level in Comparative Literature and History and in Croatian Studies. Currently she is examining representations of the theme of migration in contemporary Central European and Balkan cinema, as well as the theme of migration in general.