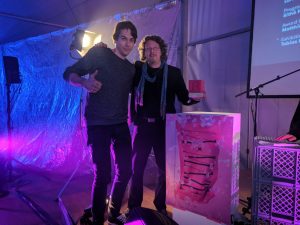 Attentat 1942, a historically-accurate video game about the Nazi occupation of former Czechoslovakia, recently won the “Most Amazing Game Award” at the prestigious A MAZE 2018 Festival in Berlin. Nevertheless, the game is not available in Germany due to the government’s controversial policy that does not allow Nazi symbolism in video games.

„Receiving the main award is a great success. The A MAZE festival is well known for its emphasis on artistic and experimental video games and the competition was huge this year,„ says Vít Šisler, the game’s lead designer. „Attentat 1942 shows the profound impact that the war and the Nazi totalitarian regime had on the lives and minds of ordinary people. It immerses players in the living histories of personal tragedy and pain as well as moments of extraordinary hope and courage.„

Based on research conducted by professional historians and documented historical testimonies, Attentat 1942 explores WWII through the eyes of its surviving civilians. Combining interactive comics, video-interviews, and archival film footage, the game presents a unique depiction of the not-so-distant past.

“Attentat 1942 is not just a historically important game with an emotional topic, but it also uses the gaming medium in a very creative way: it is a new form of documentary,“ writes the festival jury in its official verdict. „This win could be an important step in getting Germany to officially accept video games as a cultural medium with the same rights and obligations as other art forms,„ says Thorsten S. Wiedemann, founder and director of the A MAZE festival.

„The game is currently blocked for the German public, since it contains Nazi symbolism,„ explains Vít Šisler. “Although the game stems from an educational project and results from scientific historical research, the process of receiving approval to release such a video game is complicated in Germany. We are still searching for a solution that would allow the release of the game in Germany.”

„We tried to create the stories and characters in the game with maximum respect for the historical realities of the Protectorate of Bohemia and Moravia, including items from daily life and archival footage,„ says Marie Černá, the game’s historian. „Removing Nazi symbolism from a serious game on the atrocities of Nazism would be absurd,“ adds Jakub Gemrot, the game’s lead programmer.

Attentat 1942 was developed by Charles University and the Czech Academy of Sciences. It was further supported by the Czech Ministry of Culture and the Technology Agency of the Czech Republic.