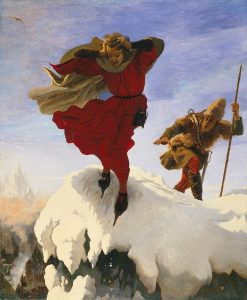 The Department of Anglophone Literatures and Cultures invites you to a workshop on ‘Byron’s Manfred: Necessity and Emancipation’ by Dr Alan Rawes (Manchester) and Dr Mirka Horova (Charles). The workshop will be held on Thursday 31 October at 15:50 in Room 111. All welcome.

Byron’s dramatic poem Manfred (1817) is one of the most influential texts of the 19th century, inspiring a wide range of literary, philosophical, visual and musical legacies and receptions. This workshop will discuss the dynamics of necessity and emancipation at work in this quintessentially Romantic, and Byronic, drama, laying bare its somewhat neglected or misinterpreted aspects.

Alan Rawes is Senior Lecturer in Romanticism at the University of Manchester. His publications include Byron’s Poetic Experimentation (2000), English Romanticism and the Celtic World (co-ed., 2003), Romantic Biography (co-ed., 2003), Romanticism and Form (ed., 2007), Reading, Writing and the Influence of Harold Bloom (co-ed., 2010), a special issue of Litteraria Pragensia – Tears, and Tortures, and the Touch of Joy: Byron in Italy (co-ed., 2014) – and Byron and Italy (co-ed., 2017). He is a past editor of The Byron Journal (2005-12), a current Joint President of the International Association of Byron Societies and co-editor of the forthcoming Oxford Handbook of Lord Byron.

Mirka Horová is Senior Lecturer in English Literature at the Department of Anglophone Literatures and Cultures at CUFA. Her publications include two co-edited essays volumes, three edited special issues of academic journals, and a range of essays in collective monographs and journal articles on Byron and other topics. She has forthcoming contributions in CUP’s Byron in Context (2019) and the Oxford Handbook of Lord Byron. Since June 2019, she is the Editor of The Byron Journal.