Dr Alan Rawes: Alfieri, Byron and the Politics of Tyranny 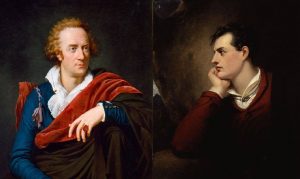 The Department of Anglophone Literatures and Cultures invites you to a guest lecture ‘Alfieri, Byron and the Politics of Tyranny’ by Dr Alan Rawes (Manchester). The lecture will be held on Wednesday 30 October in Room 111 at 14:10. All welcome.

This lecture contributes to the recent ‘international turn’ in the study of British Romanticism. It explores the long-neglected but profound influence of Alfieri on Byron’s Venetian plays. It offers a new critical overview of Alfieri’s political thinking and his theatrical method of dramatizing this thinking in his tragedies. It shows that Marino Faliero and The Two Foscari follow Alfieri’s politics and method quite precisely, especially in their reading of tyranny and revolution as mirroring manifestations of empietà and their focus on the disintegration of families as the means by which they dramatize the devastating effects of both tyranny and revolution. The essay then spotlights the influence of Alfieri on P. B. and Mary Shelley, especially in political terms, showing Alfieri to be present at key moments in both writers’ literary representation of tyranny and revolution. It concludes by pointing to the usefulness of understanding Byron’s Alfierian template when relating Byron’s plays to real-life political contexts, while also suggesting the kinds of international intellectual networks, connections and communities that fundamentally ‘Europeanized’ British Romanticism, in both literary and political terms, and that are made accessible when scholarship turns to explore British Romanticism’s engagement with even just one major Romantic-period European writer.

Alan Rawes is Senior Lecturer in Romanticism at the University of Manchester. His publications include Byron’s Poetic Experimentation (2000), English Romanticism and the Celtic World (co-ed., 2003), Romantic Biography (co-ed., 2003), Romanticism and Form (ed., 2007), Reading, Writing and the Influence of Harold Bloom (co-ed., 2010), a special issue of Litteraria Pragensia – Tears, and Tortures, and the Touch of Joy: Byron in Italy (co-ed., 2014) – and Byron and Italy (co-ed., 2017). He is a past editor of The Byron Journal (2005-12), a current Joint President of the International Association of Byron Societies and co-editor of the forthcoming Oxford Handbook of Lord Byron.