His work reflects the history of almost the entire discipline. Professor Leopold Pospíšil, an expert in the anthropology of law, professor emeritus of Yale University and former lecturer at Faculty of Arts, Charles University, passed away on 25 October 2021 aged 98 in New Haven, USA. The publishing house Karolinum Press is about to publish his memoirs Adventures in the “Stone Age” (ed. Jaroslav Jiřík, Martin Soukup).

“Indeed, I was not even afraid of death. This lack of fear dated back to my childhood when, at the age of five, I was afflicted with appendicitis which ultimately burst causing peritonitis. It was 1928 when there was no penicillin or other antibiotics to help me recover… During these operations my heart stopped and I had a strange dream that haunted me afterwards but later fortified me for the rest of my life. I dreamed I was running on a parquet floor with cracks big enough for me to fall though into a fiery glow beneath. In front of me was a brilliant golden light which I was trying to reach. Suddenly, my feet left the floor and I floated into the embrace of the golden light. What a marvellous experience!” (Pospíšil, L. 2021: Adventure in the “Stone Age”, page 19–20)
“The Kapauku concept of death tells us that while the body slowly decays and, apart from the skeleton, disappears, the soul, being a true spirit, is unaffected by death. It leaves the body and departs to the virgin forests and mountains, where it stays during the day.” (ibid. page 38)

On Monday, 25 October 2021, an extraordinary person, scholar, teacher, and great man, Prof Leopold Jaroslav Pospíšil, has left us behind. With him, his knowledge, experience, and wisdom left us forever too. Allow me to say farewell to my professor with a personal memory.

I will start it almost from the end. It is 10 October 2018 and I am visiting Prof Pospíšil in New Haven. My main task is to acquire a manuscript of his memoirs of his research on Papuan Kapauku people (the book in preparation Adventures in the “Stone Age”, Karolinum, ed. note). It is, however, a special occasion for a social gathering and Prof Pospíšil loves to have a company.

“Duck for lunch,” says Zdena, wife of Prof Pospíšil. “Chop the red cabbage, Mr Jiřík, we’ll cook it. We’ll have mashed potatoes for dinner, Lošík loves it.” In the evening, before me is a picture of an old man, whose clean-shaven face is lighted by a dim lamplight. It is an extraordinary moment. Because we watch movies that he shot during his visit of Kapauku people. Several memories remained in my memory – slash-and-burning and ploughing of fields, sweet potatoes harvest, fishing on Paniai lake, pig roast during a pig celebration… Seemingly banal sights, but with the knowledge that we watch a movie more than 70 years old, it is fascinating. Though not only this. There is no modern digital technology, projectors and 3D effects like in multiplexes, even the device, on which Professor screens the movies, witnessed long forgotten times. The individual scenes are described by Professor in detail with his characteristic husky voice, which lets you know that behind the aged face is a bright mind. The impression was astonishing. That was the last time I saw Professor Leopold Pospíšil.

Leopold Pospíšil spanned a space of almost a whole century and connected the fate of three generations. It was almost incredible to hear him tell about his flights with his father in antique biplanes which were already flying when WWI happened. His whole academic life and research, which he realized in anthropology, could be seen today as a message from the times long gone. Me and my peers, the students of Professor Pospíšil, stood on the other side of the notional pole than the people who had the great honour to meet him. There were truly many things to listen to.

My first encounter with him in April 1999 – then, I was a university student of ethnology – was already something unforgettable. He did not tell us about ergology nor house clothing of the traditional Central-European or Balkan society. On the contrary, he opened a world for us, or rather how to look at it. As a student, I had a feeling that he becomes, for a moment, part of something great that transcends him and gives him meaning. We learnt from him how a scholar should work. That they should have vast knowledge. That they should be courageous and bold. His references to Albert Einstein were sufficiently and accurately delineating his lecture.

I had the opportunity to meet with Professor Pospíšil even later during his annual spring visits at Charles University in Prague. It was my honour to organize his lecture for the alumni of Fulbright Commission in the American Centre in Prague in 2015 and accompany him during his lecture at the University of South Bohemia in České Budějovice a year later. Back then, the plan to publish his last publication Adventures in the “Stone Age” in the university publishing house Karolinum was formulated. Regrettably, he cannot receive a copy anymore. 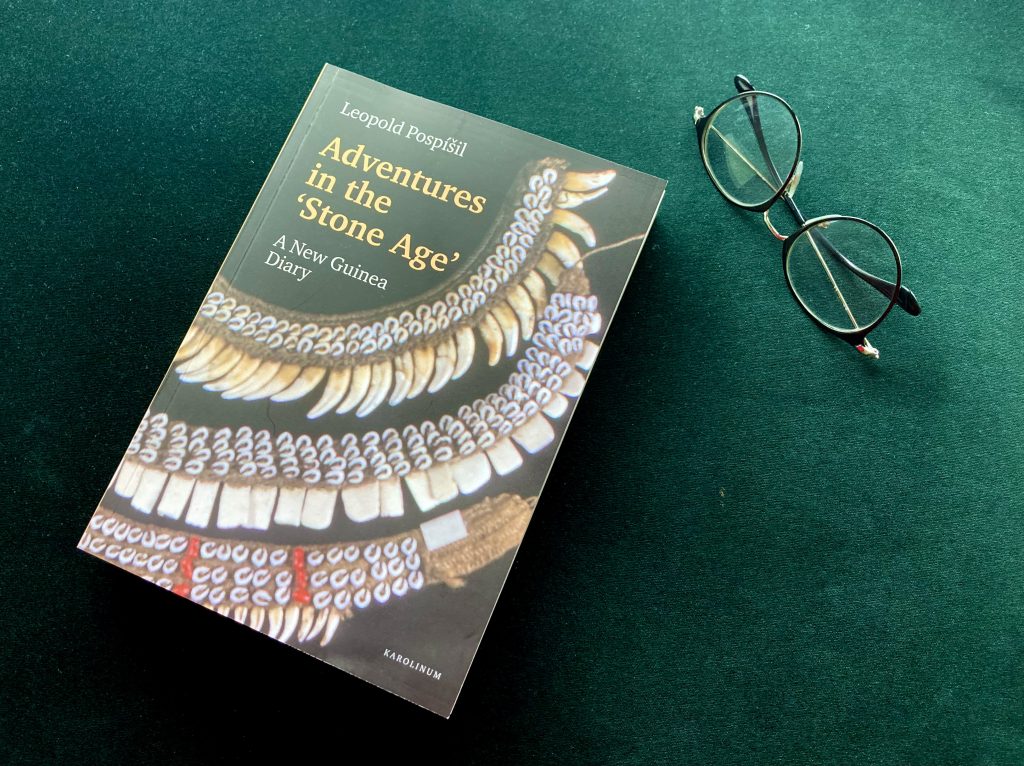 Leopold Jaroslav Pospíšil lectured as a visiting professor at several universities across the whole world. He was an author of many significant research papers and received many prestigious scientific and social awards, for example, among others, Neuron Awards (2016) and Medal from the Senate of the Czech Republic (2018).

Photo of the book: Zuzana Válková