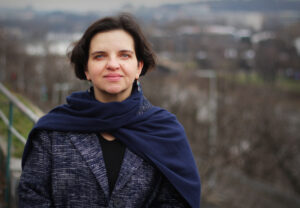 In the first round on 10 June 2021, CU FA Academic Senate elected a candidate for the Dean’s office, a philologian from the Institute of Czech Language and Theory of Communication at CU FA, Mgr. Eva Lehečková, Ph.D. In her favour voted 24 senators. Her opposing candidate was doc. PhDr. Ladislav Stančo, Ph.D., Deputy at the Institute of Classical Archaeology at CU FA who received 7 votes.

The decision of CU FA Academic Senate will now be reviewed by the Rector of Charles University Prof. Tomáš Zima. If the Rector accepts the decision, the new dean takes the office at the beginning of February 2022 and remains in her office until the end of January 2026.

You may find the profile of the elected Dean of CU FA, Eva Lehečková, her programme and priorities HERE. Ladislav Stančo offered his vision HERE.