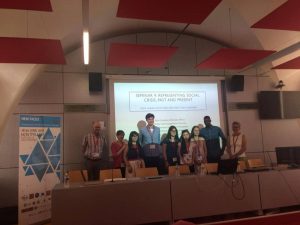 From 18 to 30 June 2018, seven students from the Department of Anglophone Literatures and Cultures, CUFA participated in the project NEW FACES, „Facing Europe in Crisis: Shakespeare’s World and Present Challenges“, a European Strategic Partnership between nine European universities that aims to promote historical understanding of the complexities of crises, which took place in Montpellier, France.

Marija Zdraveska (MA student, Department of Anglophone Literatures and Cultures, CUFA): I took part in two excellent courses. In the first one we were trying to identify passages representing, for example, economic, political or religious crises in Shakespeare’s plays and compared them with contemporary adaptations of the same plays. The second seminar dealt with Critical Discourse Analysis as a tool for dissecting and understanding the discourse of power in Shakespeare as well as in the contemporary discourse connected to the refugee crisis. But most of all, I liked the interdisciplinarity of the programme, as well as the possibility to meet amazing professors and students from all around Europe!

Václav Kyllar (BA student, Department of Anglophone Literatures and Cultures, CUFA): I also participated in two courses. I shared the first one with Marija while the second one dealt primarily with the tense relationship with the Other from the perspective of Shakespeare’s work and today’s European politics. The central question was how to create a dialogue with the Other and whether Shakespeare could help us understand and develop this dialogue. Both courses were enriching, engaging and gave me a valuable incentive for further academic research and personal growth. The staff was helpful, organisation seamless and my professors were just amazing! I feel blessed that I was given the opportunity to participate in New Faces and also for finding so many new friends among these new faces!

NEW FACES (Facing Europe in Crisis: Shakespeare’s World and Present Challenges) is a Strategic Partnership that aims to promote historical understanding of the complexities of crises (cultural, linguistic, political, social, religious, economic), to help face a complex contemporary European context. The multidisciplinary approach will trace similarities of the present developments to, and their differences from, the dynamics of the early modern period (16th-17th centuries). Hence the focus of the NEW FACES Strategic Partnership on the cultural, political and economic functions of early modern theatre and its wider historical and literary context as global values and principal agents of cultural communication in relation to Europe in Crisis. The salient feature of this perspective is the interaction of Shakespeare’s theatre with local and global contexts which has been significantly influencing popular and mass culture.

The understanding of the crises of the past will be pursued in close interaction with cultural and socio-political actors and complemented with teaching entrepreneurial skills. Round tables on “Culture and /in crisis” will gather a wide range of participants: academics, political officials, cultural mediators and artists, non-academic contributors. Among the issues tackled during the debate, the place and function of culture in times of crisis will be focused on. Culture is too often considered as a variable of adjustment by political and economic decision-makers. Yet, it is tightly interwoven with social issues and economy. NEW FACES will encourage all partners and participants to engage in long-term shared reflections and dialogue on different approaches to the subject. The conspicuous added value of NEW FACES is to confront past and present, theory and practice through a programme that will lead to the emergence of a multidisciplinary transnational think-tank on Europe in crisis. NEW FACES is a high-quality teaching programme that will increase a much-needed European civic awareness and call for socio-political-cultural initiatives. 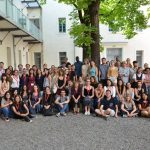 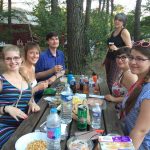 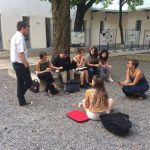