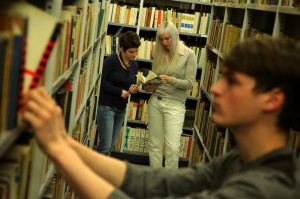 The Faculty of Arts Library is the main centre of information and library services for students, staff, and the public. It is a network of libraries housed in different buildings of the Faculty. The person responsible for this network is the director of FA Library, who works in close cooperation with the Vice Dean for Information Resources. This series of articles will introduce the individual libraries, their history and present situation, including their resources and services. This article focuses on the Faculty of Arts Library from its foundation up to the present.

History of the Faculty of Arts Library

The history of the FA Library started soon after the establishment of Charles University itself. In 1366, Charles IV founded Charles College which was meant to serve the students of liberal arts. As part of the college, the first library of the artistic faculty was founded from the manuscripts donated by the king himself. Libraries were founded at colleges, so that teachers and students would have material at hand. The importance of the library grew even more in 1370 when Charles IV bought for it 114 books from the estate of the deceased Vilém of Lestkov, the dean of the Vyšehrad chapter. The library continued to grow and by the end of the fifteenth century, the Charles College library – with its 4,500 documents – belonged to the greatest university libraries in Europe. In 1622, Ferdinand II appointed the Jesuit order administrators of the university. They moved all the college libraries to the Klementinum: the Jesuit library (Bibliotheca maior) was thus complemented by an independent Small Library (Bibliotheca minor). As soon as 1638, the Jesuits lost the Faculty of Law and the Faculty of Medicine, and a new central university library was founded in the Karolinum. The libraries of the Theological Faculty and the Faculty of Arts remained in the Klementinum. Soon after the abolishment of the Jesuit order, a central University Library was established in the Klementinum and the collections from both the Klementinum and the Karolinum were made available to the public. This one public university library was established in 1777 and continued to grow. Staff and students were using it even after the division of the Prague university into German part and Czech part in 1882. In 1918, the library became the responsibility of the Czechoslovak Republic. In 1935, it was renamed as National and University Library. 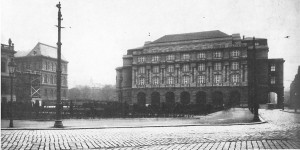 By the fusion of faculty and college libraries into one university library, the faculties had no direct influence over it, and by the end of the nineteenth century, specialised libraries started to emerge at the Faculty of Arts. They were part of the newly established seminars and departments and first, they served the staff as reference libraries. Initially, they mainly comprised of gifts. As these libraries continued to grow, the students could use them as well. The first one was the library of Slavic philology seminar, founded in 1880, followed by the historical seminar library in 1882. These two soon became the two biggest and most important faculty libraries. The library of the sociological seminar was established in 1882, the library of the classical philology seminar in 1885, and others followed soon (library of the Romance seminar: 1902; library of the classical archaeology seminar: 1905; library of the art history department: 1905; library of the English seminar: 1912). In 1929, these libraries were moved into the new main building on Smetana Square (later Krasnoarmějců Square, nowadays Jan Palach Square).

After WWII, the number of study programmes and the number of students were increasing, which meant the libraries had to grow and develop, and new libraries were established. In 1950s, the Ministry of Education recommended that central libraries should be established at those universities that did not have them. Such central library was founded at the Faculty of Arts too and its aim was to create a unified organisation of the specialised libraries and to coordinate their activities. In 1970, the faculty collection contained 680,746 book unites. There were 44 departmental libraries with approximately 60 employees. In 1973, the Ministry of Education ordered the faculty libraries to eliminate politically unsuitable works and 1,734 items were removed from the collection. These could stay in the libraries, but had to be separated in closets and only those with a written consent from the head of department could study them.

In 1970s and 1980s, the faculty libraries were receiving less funding, and purchasing and import of foreign literature had to be substantially limited in consequence. The number of staff and specialised libraries decreased and the remaining ones were losing prestige. The situation started to improve only after 1989, when democracy was reestablished in Czechoslovakia and the libraries could again cultivate relations with institutions abroad and foreign donations started to flow in. New libraries were established and the Information Centre started to automatize various library activities. 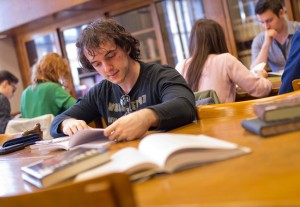 There are 23 departmental libraries in the FA network. The 24th one – Jan Palach Library – is rather specific. This library was founded in 2010 and is, on the one hand, an ordinary departmental library shared by several departments, and on the other hand, it serves as a central library of basic study materials for all BA students, no matter which programme they study or at which department. Thanks to its size, modern equipment, and convenient location, Jan Palach Library also works as a community centre for the faculty.

The collection of FA Library contains 1,1 million of book units. Every year, about 25,000 new books are acquired and approximately the same number of books is removed. The library subscribes to more than 400 printed journals. The electronic resources available through the library include more than 212,000 e-books, 97,000 electronic journals (out of which 47,000 is accessible through Open Access) and 76 databases (out which 49 is full-text). There are about 15,000 registered users (students and staff). Every year, the libraries process almost 100,000 regular loans. The libraries employ 45 members of staff, mostly librarians with a university degree or experts in the subject of the particular specialised library.

The library regularly applies for grants to restore old prints. Every year, several rare documents are restored in this manner. In 2013, the grants allowed us to restore two books from the library of the Department of Art History: Vite de pittori, scultori et architetti moderni (1730) and Italiaenische, Dalmatische, Griechische und Orientalische Reise-Beschreibung (1690). In 2014, we selected three books from the Slavic seminar library: Postylla by J. Scherer (1704), Kazatele domovnij tj. Naučení potřebných (1785) a Herbář aneb Bylinář by P. A. Mattioli (1596).

In February 2014, the FA Library jointed the project Ask Your Library. The aim of the project is to offer the public answers for short specific questions. The project has been organised for more than ten years by the National Library of the Czech Republic. The FA Library is one of the few university libraries involved and it guarantees answers to questions from the humanities. In 2014, our librarians answered 174 questions and FA Library ranks among the most frequently asked libraries. The faculty has made the most popular items from its collection which are difficult to obtain available digitally through computers in the Jan Palach Library, in Spork Palace Library, and in selected departmental libraries. In 2013-2014, the FA Library organised a unique project during which bibliographic entries were retro-converted from card catalogues into the electronic catalogue. In total, almost 400,000 scanned entries were processed. Most of the FA Library collections is now available through the Charles University Central Catalogue, all departmental libraries at the faculty are fully automated, and the FA Library has become a fully modern library whose collection is accessible online to students, staff, and the public.

This series shall be continued by articles about departmental libraries.

Bc. Markéta Tůmová, Student at the Department of Librarianship and Information Science