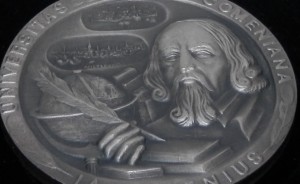 This summer, the Institute of Czech Studies, CU FA, received two prestigious international awards for its work for the Summer School of Slavonic Studies.

Melissa Shih-hui Lin, head of the Czech language section of the Department of Slavic Languages and Literatures, National Chengchi University (NCCU) in Taipei, Taiwan, presented a commemorative flag to the management of the Summer School of Slavonic Studies, which is annually held by the Institute of Czech Studies. These small flags are awarded by the NCCU to partner institutions abroad, in appreciation of long-term cooperation. This year´s award recognized the effort of the Summer School and the CU FA in providing language instruction to Czech studies students from Taiwan.

During their visit to Bratislava on 22 August 2014, doc. PhDr. Milan Hrdlička, CSc. and PhDr. Jiří Hasil, Ph.D. were presented a silver medal by the Rector of Comenius University, prof. RNDr. Karol Mičieta, Ph.D. The medal was awarded to the Institute of Czech Studies for successful long-term partnership with Studia Academica Slovaca – The Centre for Slovak as a Foreign Language at the Faculty of Philosophy, Comenius University, in language teaching methods for teaching Czech and Slovak to non-native speakers. The medal was awarded on the occasion of the closing ceremony of the 50th Summer School of Slovak Language and Culture held by Studia Academica Slovaca, and of an international symposium held as part of the jubilee celebrations. silver medal awarded by the rector of Comenius University in Bratislava