RING ROUND THE MOON 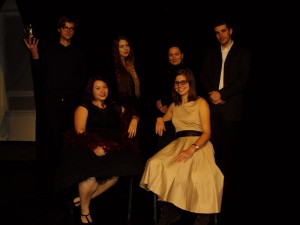 Ring Round the Moon is a comedy centred around the love life of two twins – amoral, cold-hearted Hugo and shy, romantic Frederic (both played by one actor). Harbouring feelings of love for a rich millionaires Diana Messerschmann, Hugo tries to break up her engagement to his brother Frederic by inviting a young ballet dancer Isabelle to his aunt’s château. He hopes to succeed by turning her into the belle of the ball and staging a duel for her love. Unfortunately, his plan backfires when Isabelle confesses her love for him and attempts to drown herself, unhappy about the events of the evening. Luckily, clever interventions of Mme Desmermortes, a sarcastic old lady who despite all Hugo’s precautions learns of the whole affair, ensure that a happy ending follows after all.

The play is a 1950 adaptation of Jean Anouilh’s L’invitation au Château. The first performance was given at the Globe Theatre and it was revived on Broadway in 1999.
Now is this play performed for the first time in Prague.
Performance is in English.