Bronze Age Contacts between Greece and the Eastern Adriatic 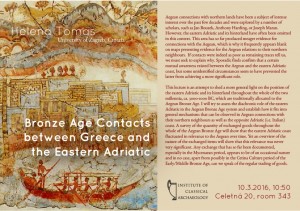 Aegean connections with northern lands have been a subject of intense interest over the past few decades and were explored by a number of scholars, such as Jan Bouzek, Anthony Harding, or Joseph Maran. However, the eastern Adriatic and its hinterland have often been omitted in this context. This area has so far produced meager evidence for connections with the Aegean, which is why it frequently appears blank on maps presenting evidence for the Aegean relations to their northern neighbours. If contacts were indeed as poor as remaining traces tell us, we must seek to explain why. Sporadic finds confirm that a certain mutual awareness existed between the Aegean and the eastern Adriatic coast, but some unidentified circumstances seem to have prevented the latter from achieving a more significant role.
This lecture is an attempt to shed a more general light on the position of the eastern Adriatic and its hinterland throughout the whole of the two millennia, ca. 3000-1000 BC, which are traditionally allocated to the Aegean Bronze Age. I will try to assess the diachronic role of the eastern Adriatic in the Aegean Bronze Age system and establish how it fits into general mechanisms that can be observed in Aegean connections with their northern neighbours as well as the opposite Adriatic (i.e. Italian) coast. A survey of the quantity of exchanged goods throughout the whole of the Aegean Bronze Age will show that the eastern Adriatic coast fluctuated in relevance to the Aegean over time. Yet an overview of the nature of the exchanged items will show that this relevance was never very significant. Any exchange that has so far been documented, especially in the Mycenaean period, appears to be of an occasional nature and in no case, apart from possibly in the Cetina Culture period of the Early/Middle Bronze Age, can we speak of the regular trading of goods.