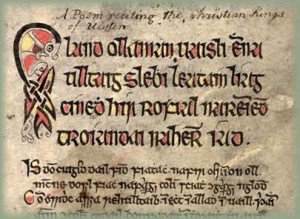 The Jan Palach Library has received an extraordinary addition to its collections. Doc. Ondřej Pilný (Centre for Irish Studies, Department of Anglophone Literatures and Cultures) has facilitated an extensive book donation from Ireland – almost 170 books that used to belong to the late Irish linguist and professor at the University College Dublin, Conn R. Ó Cléirigh. The donation is a unique collection of books dealing with Celtic literatures and languages from the Middle Ages up to the present.

How did you manage to obtain such a unique collection for the Faculty of Arts?

We acquired the books thanks to Dr Věra Čapková, a linguist who was born in Czechoslovakia but left for Ireland with her husband after 1968. The books used to belong to her former colleague, renowned professor of linguistics Conn Ó Cléirigh, who died in 1997. His family was redistributing his books and they offered this donation to us, knowing such books were not available in most libraries in Continental Europe. Dr Čapková studied at the Faculty of Arts and her relationship to her alma mater of course played a part in the decision. She knows we have been trying to advance Irish studies in Prague, and thought the books could become a good basis for further development of our Centre for Irish Studies, especially in terms of Irish linguistics and comparative linguistics of Celtic languages.

Which languages are included in the donation?

The thematic range of the books is quite broad. Most of them deal with Irish – from the earliest medieval forms of the language to modern Irish. In the field of modern Irish, there are several books on dialectology, which was Professor Ó Cléirigh’s main specialisation. Apart from dictionaries and grammar books, the donation also includes editions of medieval manuscripts. A number of medieval manuscripts survived in Ireland, and with the development of Celtic philology, critical editions and various adaptations of the material started to appear. Apart from these publications, there are books on other Celtic languages, such as Scottish Gaelic, Breton, Welsh, Manx and Cornish.

Are books of this kind difficult to get in Europe?

They are quite rare in universities and other research institutions in Continental Europe. It is also worth noting that these books are not likely to appear online in near future, which is mainly due to the shortage of funding, but also because small subjects like the Celtic studies have not been receiving much support in Europe recently. Students of these subjects therefore work with actual books, such as the great dictionary of the Irish language, which is a volume of more than 2,500 pages.

Where can one have a look at the donation?

All books are available, as restricted in-house loans (cannot be taken out of the library), in the Jan Palach Library, with the exception of ten books which are currently being re-bound. When we finally managed to transport this precious collection from Dublin to Prague, we checked the physical state of the books, and thanks to a grant from the Irish Department of Foreign Affairs, we could afford to send some of the very old and damaged volumes for re-bind. These books should be available by the end of the year.

Are the editions of old Irish manuscripts also available in the library?

Yes, these editions are not so old and could be made available instantly. The easiest way to find them is via the central online catalogue, which is a great tool for looking up other sources too. There is an extensive collection of Irish studies books in the English & American Studies Library, including a small collection on medieval Ireland and old Irish. We also have a substantial collection of modern Irish literature.

What is the situation concerning Celtic studies in the Czech Republic? Are there any possibilities to study Celtic languages and literatures?

There is a possibility to focus on Celtic languages in the programme Comparative Linguistics. Dr Bičovský, our current vice-dean and lecturer at the Department of Comparative Linguistics, wrote an introductory volume focused on the development of Celtic languages, which is the basic source text in Czech. Our Department of Anglophone Literatures and Cultures has been offering, as part of the Irish studies programme, courses of modern Irish. These seminars are open to all students at the Faculty. Nonetheless, there are no departments, centres or programmes focusing primarily on Celtic studies. Several individuals work in the respective Celtic languages in the Czech Republic, but they are either self-taught, or studied the subject abroad.

What are you currently working on?

My main research area is Irish literature in English. A recent major project was the international conference Metamorphoses, devoted to the Irish writer Flann O’Brien, which took place at the Faculty on 16 – 19 September 2015. Apart from that, I have been finishing a book which concerns Irish literature only partially – it is a monograph on the grotesque in contemporary Irish, British and American drama in English. The Centre for Irish Studies will host, in two years’ time, an international PhD conference on Irish studies, and we would also like to organise a conference on literature in the Irish language. The language of this conference should not be English, as in most cases, but Irish. All these projects are in preparation. 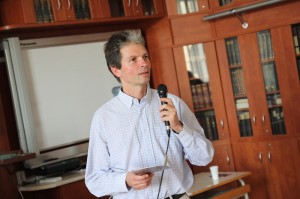 Ondřej Pilný is Associate Professor and Director of the Centre for Irish Studies at the Department of Anglophone Literatures and Cultures. He is the author of the monograph Irony and Identity in Modern Irish Drama (2006). He edited the volume Hrdina západu: Dramata a próza (an annotated edition of Synge’s work in Czech translation, 2006) and six collective monographs in English, including most recently Ireland and the Czech Lands: Contacts and Comparisons in History and Culture (with Gerald Power, 2014) and Prague English Studies and the Transformation of Philologies (with Martin Procházka, 2012). His work on Irish drama and fiction has appeared in a number of essay collections and academic journals across Europe and in the U.S. His published and/or staged translations include plays by Brian Friel, Martin McDonagh, Enda Walsh and J.M Synge, and Flann O’Brien’s novel The Third Policeman. He is co-editor of the international academic journal Litteraria Pragensia. Studies in Literature and Culture. Ondřej Pilný is Vice-Chairperson for Europe of the International Association for the Study of Irish Literatures (IASIL) for the Czech Republic, Vice-President of the European Federation of Associations and Centres of Irish Studies (EFACIS), and member of the Executive Committee of the Irish Society for Theatre Research (ISTR).