Patočka Debate 2019: Making Sense of the Results of the European Elections with Ivan Krastev

FF > Kalendář akcí > Konference a přednášky > Patočka Debate 2019: Making Sense of the Results of the European Elections with Ivan Krastev 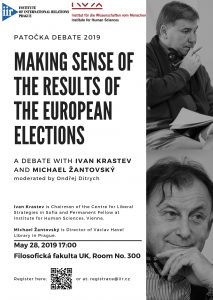 The Institute of International Relations in cooperation with Institute for Human Sciences (IWM) Vienna cordially invite you to Patočka Debate 2019 on „Making Sense of the Results of the European Elections“.

“Democratic politics need drama,” the political analyst Ivan Krastev is convinced. Elections are a form of therapy session in which voters are confronted with their worst fears – a new war, demographic collapse, economic crisis, environmental horror – but become convinced they have the power to avert the devastation. If this assumption is correct, then in front of our eyes the European Union is turning into a true democracy. The traditionally uneventful and boring European Parliament elections have for the first time produced a drama usually reserved for the national stage. In the debate, Ivan Krastev will provide a first analysis of the results of these historical elections and try to make sense of the voters’ unsettling judgments. His remarks will be responded to in a conversation with Michael Žantovský moderated by Ondřej Ditrych.

Ivan Krastev is Chairman of the Centre for Liberal Strategies in Sofia and Permanent Fellow at the Institute for Human Sciences, Vienna. He is a contributing opinion writer for the New York Times. In 2018-2019 he’s appointed Henry A. Kissinger Chair in Foreign Policy and International Relations at the John W. Kluge Center, Library of Congress. His latest book in English was the enormously successful analysis After Europe (University of Pennsylvania Press, 2017); forthcoming (together with Stephen Holmes) is The Light that Failed, a study on the perils of the politics of imitation.

Michael Žantovský is the current Director of Václav Havel Library in Prague and a Czech diplomat, politician, writer, and translator, former Spokesman, Press Secretary and Political Director to President Vaclav Havel, Senator, Ambassador to the United States, Israel and the United Kingdom. In 1989 he was a founding member and spokesman of the Civic Forum, an umbrella organization that coordinated the overthrow of the Communist regime.

Ondřej Ditrych is Director of the Institute of International Relations Prague.

For the debate, it is necessary to register until May 24.