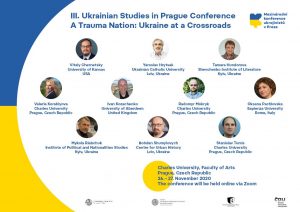 Anthony Smith famously claimed that historical traumas and memories of collective suffering constitute a nation out of a heterogeneous population. This recipe of nation-building was propped up in the late 20th century by “the rise of the victimhood culture” (Campbell & Manning 2018). Inspired by the anti-colonial discourses and the symbolic capital gained by all sorts of oppressed minorities through insisting on their traumas, Eastern European nations engaged in what Timothy Snyder calls “competitive martyrdom.” Ukraine is a telling case thereof: quite outspokenly starting from Viktor Yushchenko’s presidency (and long before in the intellectual circles), the national identity was being built around traumatic events – the Great Famine in the past and the Russo-Ukrainian war in the continuing present stand as the nodal points of the national drama. However, such a reading poses a number of uncomfortable questions. Not all the members of the community are receptive to these efforts: some of them recognize an alternative set of traumas (Pal Tamas aptly labelled them the “orphans of the Białowieża Forest”), others reject the victimhood identity altogether. On top of that, the oppressor does not recognize the trauma(s) thus creating a deadlock. On the personal level, psychotherapists recommend acknowledging a trauma, articulating it, then letting it go. But what is a way out for the Ukrainian society at large? Is the celebration of anti-colonial fighters and the insistence on the postcolonial status helpful? Does the recurring (re)articulation of historical traumas solidify the national brotherhood or weaken the still-hegemonic national project? How to recognize historical traumas without getting stuck in them? And, finally, what is the role of public intellectuals in the current debates on the issues?