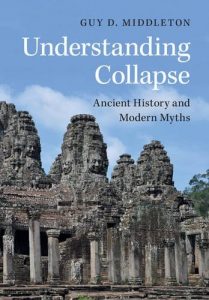 In this final lecture, we look at a specific instance of collapse known from the archaeological record – that of the palatial Late Bronze Age of Greece and the Aegean. The competing theories will be introduced and recent responses examined, including the proposal that climate change caused collapse. One focus will be on how the period running up to the collapse has been characterized – as a period of crisis; another will be on the role of the Sea Peoples, known from Egyptian texts, in the events of the decades around 1200 BC and their place in the history of Greece and the wider Eastern Mediterranean region. We shall also consider recent proposals about the political geography of Late Bronze Age Greece and how these different views affect our conception of the c. 1200 collapse.