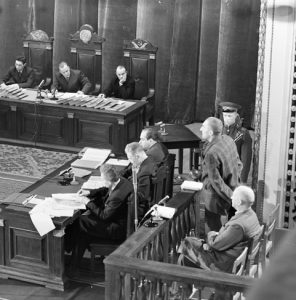 This conference originates from the encounter of three projects: a Russian-French project on trials in the USSR (FMSH/RGNF), the micro-project of the Labex Création, Arts, Patrimoines ‘Images de la justice”, and the WW2CRIMESONTRIAL1943-1991 project supported by the French National Research Agency.

The conference will highlight the specificity of the publicized trials within the procedures conducted against criminals against humanity. By including the many professional and social actors who got involved and shaped the public, or publicized trials, we endeavour to question the notion of publicization. Such approach will enable to deal both with the political dimension of public trials and with the forms of mobilization of professional and social actors in the context of the Cold War…

Find out the program and more information about this conference.