Symposium with Professor Barry McCrea: Languages of the Night 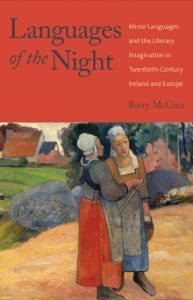 Department of Anglophone Literatures and Cultures, Faculty of Arts, Charles University is happy to announce a symposium with Professor Barry McCrea on his book Languages of the Night: Minor Languages and the Literary Imagination in Twentieth-Century Ireland and Europe with the participation of Dr Alice Flemrová, Prof. Zdeněk Hrbata, Dr Radvan Markus, Petra Johana Poncarová, and Dr Daniela Theinová, moderated by Dr Justin Quinn.

Barry McCrea’s Languages of the Night, published last year, was a provocative and original study of the relations between European modernism and minor languages. It dealt with the work of Irish-language poet Seán Ó Ríordáin, the Friulian poetry of Pier Paolo Pasolini, and the role of patois in Marcel Proust. In this symposium a group of scholars from several departments of the faculty will respond to Professor McCrea’s work.

Barry McCrea is a novelist and scholar of modern European, Latin American, and Irish literature. His most recent book is Languages of the Night: Minor Languages and the Literary Imagination in Twentieth-Century Ireland and Europe (Yale University Press, 2015), which won the American Comparative Literature Association’s René Wellek Prize for the best book of 2016. He is the author of The First Verse, a novel, winner of a number of awards including the 2006 Ferro-Grumley Prize for fiction and a Barnes and Noble ‘Discover’ prize, and of In the Company of Strangers: Narrative and Family in Dickens, Conan Doyle, Joyce and Proust (Columbia University Press, 2011), which won the Yale Heyman Prize for scholarship in the humanities. He is Professor at the University of Notre Dame in the US. For more information about Professor McCrea, visit:http://english.nd.edu/people/faculty/mccrea/.

Professor McCrea’s visit is hosted by the Centre for Irish Studies at Charles University and supported by the Department of Foreign Affairs and Trade, Ireland.