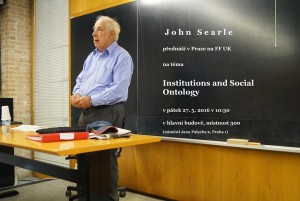 Searle’s theory of institutions is one of the liveliest areas of contemporary philosophy (his book The Construction of Social Reality is the most cited philosophical treatise written in English since after 1995) with applications in most of the humanities and social sciences – be it law, economics or literary theory. Prof. Searle will try to give an overview of the contemporary state of the theory which should be comprehensible and useful even for people unacquainted with his writing.

John Searle (1933-) is one of the leading figures of contemporary analytical philosophy. His philosophical career lasts a few decades and covers broad range of topics: he studied at Oxford 1952-59 (under Austin and Strawson) and he is a teacher at Berkeley since 1959 (his lectures are very popular to this day). His most important works are: Speech Acts (1969), Minds, Brains and Programs (1980), Intentionality (1983), Rediscovery of the Mind (1992), The Construction of Social Reality (1995), Rationality in Action (2001), Seeing Things as they Are (2015)