Irina Turner: Does Facebook Eat Up Public Airwaves? The Impact of Media Convergence on Radio in South Africa

Calendar > Lecture > Irina Turner: Does Facebook Eat Up Public Airwaves? The Impact of Media Convergence on Radio in South Africa 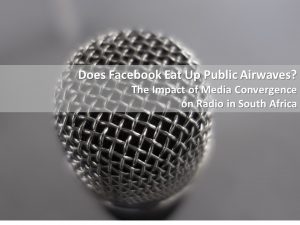 Radio remains the most widespread medium in South Africa. It, nevertheless, struggles with dwindling audiences and is thus pushed to marry with other media formats such as social media to maintain relevance. While entertainment and information remain radio’s main mandates, content and actors have to adjust to accommodate another elephant in the room; i.e., the commercial obligation of promoting and selling different types of (non-)material products through the airwaves on behalf of their sponsors; either overtly or subtly integrated into info- and edutainment. The hybridization and merging of traditional genres known as cross-media convergence, plays a vital role in this commercialization process.

On the empirical example of selected South African radio shows, the presentation will discuss how commercial logics of social media in particular affect the public airwave space. Commercial communication on radio ― integrated into traditional radio genres ― is analysed from the perspective of discourse and conversation analysis on a semantic and pragmatic level. It thereby considers the multilayered effects that convergence, e.g., through streaming video recorded radio shows on social media, bring about in realizing this format. Radio might drift away from its core purpose of providing a public space for content of general public interest towards exclusively adhering to market interests channelled through social media. In consequence, the notion of publics and audiences itself has changed.

Irina Turner is Academic Councillor at the chair of African Language Studies at the University of Bayreuth, Germany. Her research interests are interdisciplinary questions of cultural and media studies, political communication and applied linguistics, which enquire communication practices and language change in South Africa.

In 2015, she published her PhD on the businification of political language and rhetoric in post-apartheid South Africa and currently works on the effects of decolonization and digitalization on the South African language isiXhosa.

At the University of Bayreuth, Irina teaches courses on BA and MA level in the programme African Verbal and Visual Arts (AVVA). These include methodology and field methods, semiotics, language philosophy, rhetorics, sociolinguistics, academic writing and presentation and interdisciplinary courses at the intersection of text, media and image.