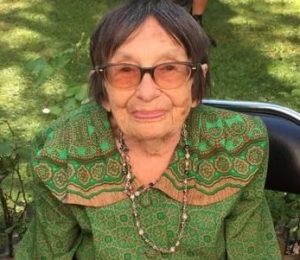 On 6 December 2021, Zorica Dubovská, one of the most prominent persons of the Czechoslovakian-Indonesian relations in the past seventy years, passed away aged 95. She was a unique person of the values and ideals of the First Republic of Czechoslovakia who found personal and professional fulfilment in cultures of remote southern and south-eastern Asia.

As a young girl growing up in a family where morally principled people have formed her opinions and views on the outside world – e. g., her uncle Bohumil Borecký, the commander of the legionary regiment in WWI, uncle Svata who was in one of the highest positions in ČKD engineering company but above all her beloved father thanks to whom she grew fond of languages and who showed he the far horizon of south and south-eastern countries in Asia – she could not have adopted other traits than humanity, patriotism, truth, and moral equality. The values that disappeared from our society after the social revolution in 1948 for a long time.

In the short period of after-war freedom, she enrolled at the Commercial College in Prague (today the University of Economics and Business), learnt Indonesian, which she later taught at the Oriental Institute, and fell in love with her future husband Ivan. At the beginning of the 1950s, she already graduated as Engineer and worked in Gottwaldov (now Zlín) but she moved back to Prague in less than a year to study, on the recommendation of the founder of modern Czechoslovakian Arab studies, Prof Karel Petráček, Standard Arabic and the History of the Near East at the Faculty of Arts, Charles University. She was particularly interested in Indo-European linguistics and later in the phonological analysis of Indonesian. Amongst her teachers were, for example, Indologists Vincec Lesný and Oldřich Friš.

Zorica came hardly to terms with the reality of the 50s that affected her family. Her mother, as the wife of the First Republic entrepreneur, could not find a job except for inferior and poorly paid jobs and was even evicted from her apartment. Zorica was repeatedly haunted by memories of her prematurely deceased father. She was deeply troubled by all this. One of the few joyful events was the birth of her daughter, Sabina, in November 1951.

In 1955, she defended her master’s thesis at CU FA and immediately received a work permit at a newly established embassy in Jakarta. Although she was never a member of the Communist Party, the regime needed somebody who spoke Indonesian and indeed so much that when she refused, they asked her again two years later. At the beginning of 1958, she flew for the first time into Indonesia where she felt truly free and happy. She herself used to recollect the year, when her 6-year-old daughter Sabina came right after her, as one of the most beautiful in her life.

It is also maybe the reason why she regularly returned to Indonesia and visited it seven times in total, for the last time in 1994. During her travels, she made new teaching contacts and collected materials for her translations and academic work. Simultaneously, when it was possible, she taught Indonesian and the cultures of south-eastern Asia, especially at the State Language School in 1961-1984 that was in the shadow of the everyday interests of the Government, and where she inspired many generations of Czech Indonesian experts by her casual and natural approach to the teaching.

After 1989, she enthusiastically began with the revitalization of civil society. She founded an association Continents Connecting Diplomats, Artists, Students, and Asian Enthusiasts, she popularized Indonesia and revived the learning of Indonesian at CU FA and, thus, taught two generations of Indonesian experts. She published translations of Indonesian literature, textbooks, readers, interpreted during the visits of Indonesian politicians, privately taught Indonesian, and was a certified translator. For her lifetime contribution and stance, she received Gratias Agit in 1997 and one of the highest state decorations of the Indonesian Republic, the Bintang Jasa Pratama medal, in 2010.

Dear Zorica, on behalf of all to whom you opened new horizons and to whom you were an inspiration, I wish you to be happy up there.