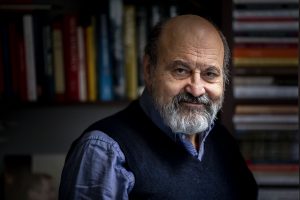 On an international conference “The Role of Christians in the Process of European Integration” in Krakow, Prof Halík received Bishop Pieronek’s Award for his outstanding stances and achievements in connecting Christian and European values.

The prize winner, Prof Halík, from the Department of Philosophy and Religious Studies at CU FA gave a lecture on a conference, which took place on 28-30 October 2021, as one of the main lecturers on “Crisis of Values and the Current Vision of the Humane Person.” Among the previous winners of this award were, for example, former Polish Prime Minister, Prof Hana Suchocka, and a close colleague of Pope John Paul II, Prof Rocco Butiglione.

The gathering, where several political, church, and academic representants from many European Countries gave a lecture (incl. Jean-Claude Hollerich), was co-organized by a faction of the European People’s Party in the European Parliament, the Commission of the Bishops’ Conferences of the European Union (COMECE), and Robert Schuman Institute.