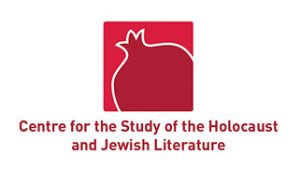 The Centre for the Study of the Holocaust and Jewish Literature was established in 2010 at the Department of Czech and Comparative Literature at the Faculty of Arts, Charles University. It aims to study literature related to the Shoah/the Holocaust and Jewish cultures in the Czech Lands and Central Europe. The Centre is also active in the field of Israel Studies and conducts socio-cultural qualitative research into contemporary Jewish communities in Europe and beyond.

The Centre hosted or co-organized more than a dozen international conferences, workshops, and events during its existence. One of them was the 8th Annual Conference of the European Association of Israel Studies (University of London, SOAS). The conference took place on 8-10 September 2020 at the Faculty of Arts, Charles University, and over 140 international guests attended.

The annual series of nine international workshops on the Holocaust in Literature and Culture has also received significant attention.

So far, the most crucial publication has been an extensive collective monograph of more than 1000 pages Cizí i blízcí. Židé, literatura, kultura v českých zemích ve 20. století. (Close and Foreign: Jews, Literature, and Culture in the Czech Lands in the Twentieth Century), which deals with thematizing Jewishness in Czech literature and culture in the “long” twentieth century. The monograph was co-authored and edited by professor Jiří Holý.

The Center for the Study of the Holocaust and Jewish Literature is celebrating its ten-year anniversary (2010-2020) this week during the S. H. Bergmann Conference.