Svoboda 1945: Liberation Has Been Released: The First Game Ever about Collectivization

FF > News > Svoboda 1945: Liberation Has Been Released: The First Game Ever about Collectivization 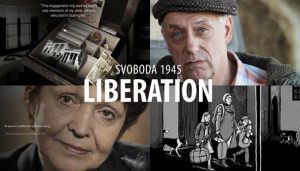 Svoboda 1945: Liberation is a follow up to the award-winning Attentat 1942 (IGF finalist, A MAZE winner, Apple Design finalist). Discover the secret history of your own family in a captivating story about reconciliation with the dark past in a game brought by an independent Prague-based studio Charles Games.

“We believe that games are a great medium for telling stories and have the power to tackle serious issues such as the rise of dictatorship, or historical reconciliation,” says lead designer Vit Sisler.

You are sent to a small village of Svoboda near the Czech-German border to investigate an old feud. You soon realize the case is linked to World War II and the rise of the communist dictatorship that came after.

During the investigation, you discover a photograph of your grandfather. What was he doing here? Was he somehow involved in the violence? Find out the truth and complete his story.

“With Attentat 1942, we decided to use live action interviews to really give you the impression you are actually talking with the witnesses. It is accompanied by interactive comics and playable memories where the past becomes interactive and you can experience it hands-on,” explains Sisler. “With Svoboda 1945: Liberation we have improved upon this formula, pushing ourselves creatively and narratively. But the core idea still remains – using unique properties of games to shine a new light onto often neglected histories,” Sisler adds.

Talk to people who saw the horrors of war first-hand in our in-depth dialogues where every choice matters. How to approach someone who lost a friend on the battlefield? Or a woman who was expelled as a child, returning for the first time to see the place where she grew up?

Relive the memories of the witnesses in atmospheric mini-games. Develop old photos that reveal details of tragic events, try to keep your farm together in the face of communist terror, or play cards on the eve of historic elections.

Uncover the things your grandpa never talked about. And answer for yourself: can the horrors of war justify the violence that came after its end?

Places full of remnants of the past await. Svoboda 1945: Liberation is a game full of rare historical material, footage, and memorabilia for you to explore.

Charles Games is a Prague-based studio focused on exploring the narrative possibilities of video games with a strong emphasis on innovative game design.

If you need anything else, please don’t hesitate to contact me at info@charlesgames.net. We are happy to share review copies!