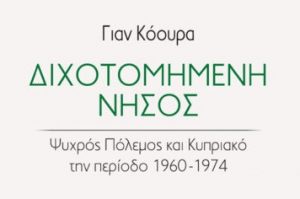 The Greek translation of a book by Dr Koura from the Institute of World History at CU FA “Divided Island: Cold War and the Cyprus Dispute in Years 1960-1974” has been published in an Athenian publishing house in May 2021.

The book reinterprets the dimension of “the Cyprus Dispute” and offers new findings of the role of Czechoslovakia and the Soviet Union in the Cyprus conflict in the 1960s and 70s. It is an extended translation of the Czech publication that was published as the first book of the edition “Cold War – New History” in the publishing house Epocha in 2019. The edition is published in cooperation with Cold War Research Group at the Institute for the Study of Strategic Regions at Charles University. The book was translated into Greek by Konstatinos Tsivos from the Institute of Greek and Latin Studies at CU FA.

Jan Koura, the Head of the Cold War Research Group, has worked on the book for several years and is based on research at American, British, Czech archives. “The positive foreign reception of the book shows that the research of the Cold War may still bring new and not yet discovered findings of the involvement of the Eastern Bloc elsewhere in the world during the Cold War. The research with this focus helps to uncover hidden pages of other countries‘ history and the Cold War conflict itself,” the author of the book says.

The most important historical works, written on the given theme as part of the history of international relations, are looking at the “Cyprus Dispute” after 1960 predominantly as a matter of the West. The sole use of western sources has only scratched the surface of the foreign policy motives of the socialist country of Cyprus. Therefore, this topic offers an opportunity for its reconsideration, Dr Koura explains in the resume of the book.

The book mainly points out that Czechoslovakia was involved in the local conflict more than was presupposed. “The import of weapons has escalated the conflict, supported the independence of Cyprus and, thus, raised uncertainty between Greece and Turkey; the first country wanted to annex Cyprus to Greece and the latter one to Turkey. Due to its policy against Cyprus, Czechoslovakia weakened the south-east wing of NATO and the influence of the West on the island, which was the main aim of the Eastern Bloc throughout the Cold War,” Dr Koura summarizes