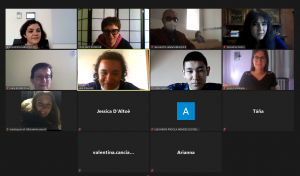 It has become a tradition that the students of Czech Studies at the University of Padua visit Prague at the end of the academic year. The Faculty of Arts, Charles University, prepares for them cultural-educational programme as part of the international cooperation.

Both institutions prepared a one-day virtual meeting, which happened on Monday, 31 May 2021, so that the Italian students do not again miss an opportunity to meet native Czech speakers after the last year’s pause due to the pandemic. The main person behind it is the professor of Czech literature at the University in Padua, Alessandro Catalano.

Students gained valuable information about electronic resources on the contemporary Czech language (text corpora and electronic vocabularies and databases) and how to use them. It was a post-gradual student at the Institute of Czech Language and Theory of Communication, Mgr. Sylva Nzimba, who conveyed and presented the information. Then, doc. PhDr. Ivana Bozděchová, Csc., at the same institute invited the students to active participation in a lexicological-phraseological workshop named Beautiful Word Opens Even Iron Doors.

The programme was followed by a discussion on Theatre Seminar as a Study of Czech Culture and Language and Stage Adaptation of Erben’s Ballads led by PaedDr. Ilona Starý Kořánová, Ph.D. at the Institute of Czech Studies (CU FA). In these participated foreign students of the institute who played under her in a student performance of K. J. Erben’s Ballads along with their Italian colleagues. The colleagues had rehearsed recitation of Erben’s The Water Goblin, which was accompanied by original illustrations by an Italian artist, led by a CU FA graduate and Czech teacher Lajla Mashehová at the University of Padua.

The University in Padua, founded in 1222 as the seventh university in the world, is among the most well-known and oldest Italian universities. The Lectorate of Czech in Padua was established and operates under the Czech Government’s Programme for the Support of Czech Cultural Heritage – currently, the Ministry of Education, Youth and Sports sends 36 Czech teachers to 24 countries, in Italy also to Neapoli and Udine.