Where Did Slav Come From? A New Collective Monography Offers Some Answers

FF > News > Where Did Slav Come From? A New Collective Monography Offers Some Answers 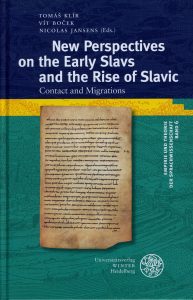 Publication “New Perspectives on the Early Slavs and the Rise of Slavic. Contact and Migrations” has been published in cooperation with the Heidelberg University (Slavisches Institut) and the Institute of the Czech Language at the Czech Academy of Sciences. The authors that contributed to the publications are Jiří Dunda, a doctoral student at the Department of Philosophy and Religious Studies, doc. Tomáš Klír from the Department of Archaeology, and doc. Jiří Rejzek from the Institute of Czech Language and Theory of Communication at CU FA.

The collection offers contributions of linguists, archaeologists, and historians specializing in the problematics of early Slavs which were presented at the conference “Language Contact and the Early Slavs” held in Prague in October 2017 (research centre Identity v pohybu, i.e. Identities in Motion).

In the publication, the authors focus on one of the main topics of contemporary medieval studies and historical linguistics – the extremely rapid expansion of the Slavic language in a great part of early medieval Europe. The unifying idea of the publication, based on findings from several scientific disciplines, is that it offers different answers in various geographical and political contexts on the question of the relationship between Slavic language, ethnicity, and material culture.

The publication of the book was supported by the Fund of Strategic Partnerships at Charles University 2019, minigrant +4EU 2020, and KREAS.