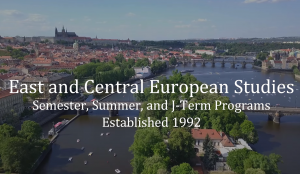 Seventeen projects had submitted for the “STUDY IN Award in the Field of Internationalization” and six projects have been short-listed. The winner will be announced at the beginning of December. The Summer School is organized by a team from the ECES programme.

The Summer School of the East and Central European Studies will be introduced as one of the six best nominated projects in a joint publication of the successful international education projects in 2020. The Study In award and the publishing of the booklet are provided by the Czech National Agency for International Education which aims to promote Czech university education abroad and support the internationalization of Czech universities.

The ECES programme operated by the Faculty of Arts, International Relations Office contributes to the internationalization of the whole Charles University. Every year, hundreds of students come to Prague to study for a semestral or short-term summer study visits. Owing to the courses and social events, the foreign students gain insight into the Czech and Central European culture, history, and the present.

“Overall, the ECES programmes – both the studies during the semester and summer programmes – are an important link between CU FA with Charles University and the prestigious universities in the USA, Canada, and other countries. To the students, we offer the best from the programmes in which CU FA excels, be it Bohemian studies, Slavonic studies, Central European studies, political science, social studies, art history, or film studies. The students send us feedback on the teaching content and style, and the relevance of the particular topics to the international academia. The ECES programme is a systematic call for CU FA to preserve the high standard of education and scientific work,” as Prof Markéta Křížová, Vice-Dean for International Relations, describes the benefits of the programme.

The project of the online Summer School was going on for three weeks and offered six courses chosen based on the evaluation of the programme’s graduates: Czech Language for Everyday Use, Economic Decline of European Empires, Jewish History in Central and Eastern Europe, Sociology of Food a Ten Centuries of European Architecture: The Story of Prague.

The concept of the programme is based on the experience which the organizers gained in Spring 2020 during the pandemic when the in-class education had to be completely carried over to the virtual space. According to Prof Křížová, the swift reaction to the situation, which was unprecedented and ensured that the obligations towards partner universities and students were met, was what the committee impressed. “Even in the curtailed form, we managed to offer an attractive programme, basically a concentration of the most interesting things that ECES offers. We received the nomination thanks to the huge personal commitment of the whole ECES team, thanks to the support from the CU FA employees, thanks to the teachers who had spent much more time with the preparation of online classes and their realization, thanks to students who in the unusual situation continued with their works and passed the courses,” says Prof Křížová.

For the first time, the teachers have lectured online and used various interactive tools during the lectures to make them more attractive, including online games and online cooking courses. “Once a week, we sent a newsletter to the students with cultural background materials and tips on online cultural activities, such as links to music, movies, virtual excursions of Czech landmarks, recipes, and podcasts on Czech culture,” says the director of the ECES programme Ivana Petrželová.

Alex Went, the teacher of “Ten Centuries of European Architecture” course, describes this year’s experience with the distance learning from the teacher’s perspective. In the previous years, he guided the foreign students through the landmarks in the centre of Prague, but this year he had to deal with virtual tours via Google Street View. “If there was anything I missed, it was my most important aspect of teaching – personal interaction and live debates with students.” The feedback was, despite all the circumstances, very positive.

According to the ECES programme team, the realization of the Summers School was a success, the positive reactions of the course graduates are a proof of that. Due to these accomplishments, the members of the team believe that in the future it will lead to an improvement of communication with partner universities abroad and, therefore, a higher number of students.