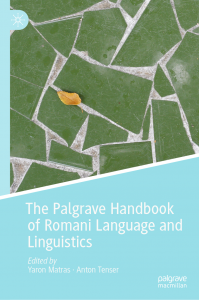 Faculty of Art, Charles University, is a leading research centre of the Romani language. Specialists from the Department of Central European Studies and Department of Linguistics contributed to a prominent international team of authors „The Palgrave Handbook of Romani Language and Linguistics“ published by a prestigious publishing house Palgrave Macmillan.

Furthermore, Dr Elšík and Dr Beníšek are simultaneously co-authors of the chapter on Romani dialectology. A graduate of Romani Studies, Zuzana Bodnářová, who now teaches at the University of Graz and a co-author of a text on the influence of Hungarian on Romani, has also contributed to the publication.

The chapters of Czech scientists reflect a wide thematic spectrum of Romani linguistic research at CUFA, from historical linguistics, structural linguistics, dialectology, up to sociolinguistics.