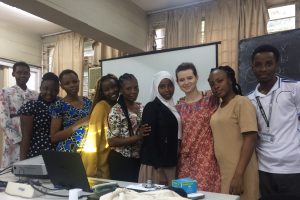 On 20-24 January, there was an interpreting workshop at a Tanzanian university on which participated a PhD student of the Institute of Translation Studies at CUFA, Elizaveta Getta, and a lecturer from the Department of Foreign Languages and Linguistics, University of Dar es Salaam. Apart from the internationalization of Charles University in Africa, the stay, financed mainly by the POINT scholarship, was meant to contribute to the establishment of cooperation between Tanzania and the Centre of African Studies (CAFR).

The workshop’s programme consisted of four lectures and subsequent discussions with pedagogues and the management of the language department. At the lectures, the Faculty of Arts, Charles University, and its Institute of Translation Studies were both introduced. Tanzanian students and pedagogues were acknowledged with the Institute’s work and obtained information on the taught subjects, languages, and international collaboration. That was followed by a discussion on how the teaching of interpretation varies at CUFA and University of Dar es Salaam.

Charles University managed to make contacts with the University of Dar es Salaam and started to discuss a possible collaboration with CAFR. The collaboration may have several forms: student and academic exchange, videoconferences and videolectures, or exchange of study material.