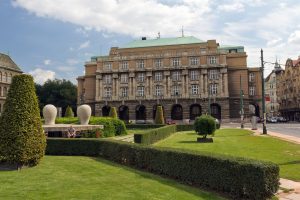 Paper proposals representing postgraduate projects in the area of Irish Studies are invited for an international conference that follows the success of “The Politics of Irish Writing” (2009), “Boundary Crossings” (2011), “Tradition and Modernity” (2013) and “Influences, Intersections, Interactions” (2017). As in previous years, we wish to offer discussion space for graduate students working in Irish Studies. We particularly welcome those working outside the Anglophone academic environment.

At an event on “The Challenge of a New Irish Studies” in 2017, Terence Brown identified the most pressing question facing scholars in the field in terms of European, rather than Irish, identity: “the question is,” Brown asserted, “what is Europe?” As well as being central to political debates across the continent, this question’s rising importance in an Irish context is evident in recent research. From reconsiderations of Ireland’s engagement with the two world wars to reframings of Ireland’s “language question” in a broader context, the study of Irish culture in the context of Europe has yielded some of the most exciting research results over the last couple of decades, significantly reshaping the discipline of Irish Studies. The examination of the extensive web of links between Irish and other European cultures and histories has inadvertently gained in urgency after the result of the Brexit referendum in June 2016 as extreme forms of nationalism have come to dominate the discourse around the border between Ireland and Northern Ireland. The conference therefore welcomes proposals on any aspect of Irish culture, society, history or politics, with special attention to the multiplicity of relations with Europe.

Participants are encouraged to address the subject in a wide range of ways, which may include:

The conference is hosted by the Centre for Irish Studies at Charles University, Prague and takes place under the aegis of the European Federation of Associations and Centres of Irish Studies (EFACIS). The event is supported by the Department of Foreign Affairs and Trade, Ireland.

The conference does not involve a registration fee. Publication options will be discussed as part of the closing session of the conference; these include a refereed collection of essays.

In order to provide detailed feedback for each paper, the conference format will consist of 15-minute summaries followed by responses from nominated participants, who will respond to the complete paper as submitted in advance; their response will be followed by a general discussion. Participants should expect to be appointed as respondents to other papers. Complete papers are expected to be in the region of 3 000 words, with a submission date of 17 June 2019.

The closing session, presented by established Irish Studies scholars, will focus on research and publication opportunities, career building, and funding in Irish Studies.

Paper abstracts of 250 words should be submitted to the organisers at praguepostgraduate@gmail.com by 30 January 2019. Abstracts must include the title of the paper, your name, e-mail address and institutional affiliation, as well as any AV requirements for the presentation. Notification of acceptance will be issued within two weeks of the deadline.

Do not hesitate to contact us with any further inquiries.