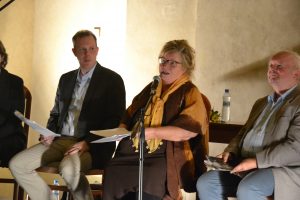 On 14 – 16 September 2017, about 60 scholars from Europe and North America gathered in Prague for the conference  Ar an Imeall i Lár an Domhain (On the Periphery in the Centre of the World), an international Irish-language event hosted by the Centre for Irish Studies, Department of Anglophone Literatures and Cultures, Faculty of Arts, Charles University.

The main organiser, Dr Radvan Markus, is a literary scholar and lecturer in the Centre for Irish Studies. He translated the historical novel L’Attaque by Eoghan Ó Tuairisc and a number of short stories into Czech, and his translation of one of the most significant modern novels in Irish, Máirtín Ó Cadhain’s Cré na Cille, is due for publication shortly. Dr Daniela Theinová, also a lecturer in the Centre for Irish Studies, has translated the work of a number of Irish-language poets. Her translation of Pádraic Ó Conaire’s novel Deoraíocht (1910) was the first Czech translation of an Irish-language novel.

The Irish Ambassador to the Czech Republic, Charles Sheehan welcomed delegates to his residence for a reception. Delegates also visited the library of Strahov Monastery with Mgr. Jan Pařez, archivist and co-author of The Irish Franciscans in Prague 1629-1786 (2015). As part of the conference programme, an an evening of Irish music and culture open to the public was held at the Stahov Monastery summer refectory. The most famous poet currently writing in Irish, Nuala Ní Dhomhnaill, recited some of her best-loved works, accompanied by translators Daniela Theinová agus Martin Světlík. Professor Alan Titley, poet, novelist, translator, and academic, read a selection of his stories and poems, accompanied by Czech translations by Radvan Markus. The readings were interspersed with harp music and songs in Irish by the acclaimed musician Síle Denvir, and with songs in Irish, Czech and Catalan by Kateřina García and Pádraig Ó Liatháin.

The conference has been reported on extensively in the Irish media, for example in The Irish Times.