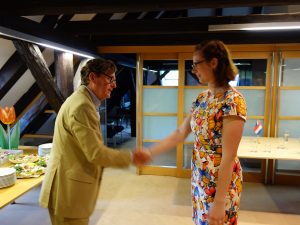 Students of the MA programme Dutch Studies at CUFA have recently succeeded in international competitions and also in the Jiří Levý Competition for young translators organised by the Czech Literary Translators‘ Guild.

Anna Krýsová became the absolute winter of the International Student Dictation in Dutch, leaving behind more than 100 students of Dutch Studies from 16 universities in 10 countries. The prize consists of the monolingual dictionary Van Dale and also of a short stay at the University of Wroclaw where she could establish useful contacts for her intended PhD studies during the international Dutch Studies conference.

During this conference, the authors of best student works from Central and Eastern Europe received their prizes. One of them was the student of Dutch Studies at CUFA Eva Ungermannová, who received the award for the best MA thesis defended  in 2015, How Czech Students of Dutch Learn the Article, which she completed under the supervision of Professor Jan Pekelder.

Last but not least, Dutch Studies in Prague were also successful in the area of literary translation: after many years, one of the winners of the Jiří Levý Competition for young translators was a translator working in Dutch: Lukáš Vítek submitted an extract from the classical novel by Maarten ‘t Hart A Flight of Curlews (Een vlucht regenwulpen) which has not been translated into Czech yet.